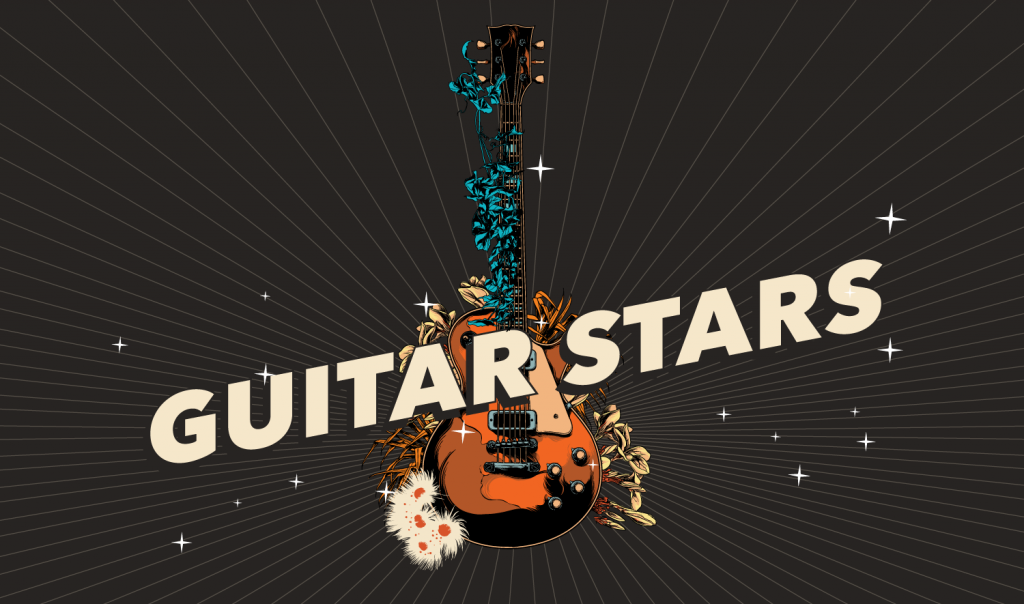 Bluesfest has always brought some of the best guitarists to the yard, every Easter Long Weekend… and this year is no exception. Aussie guitar shredders are certainly among the best in the world.

Just take a look at this list ready to set the Bluesfest stages on fire!

There is no denying the prodigious talent of John Butler. A long-time Bluesfest ‘family’ member – he is a firm and powerful favourite whenever he plays our stage.

An absolute guitar star in their own right! After they were gifted their first at the age of three, Tash developed a love for self teaching hence becoming a wizard on some 15 odd instruments – a true virtuoso!

Gritty soul and Blues troubadour, Julz is the driving guitar force within Hussy Hicks. Unsurprisingly, she was voted #5 in our Bluesfest favourites poll last year.

A ‘bottleneck’ slide and multi-stringed guitarist and founder of Backsliders. A Bluesfest veteran with 17 appearances to his name, don’t miss Dom and his ‘delta blues wall of sound’ next Easter.

Chris Cheney may not be playing ‘pure Blues’ with The Living End – but really, do we care? When Chris unloads onstage, we witness Punk-Rockabilly shredding at its finest!

Kara has been shredding since she was 16 – first with her brother in ‘Papa Lips’, and then solo. Mesmerizing, fiery, soulful have all been used to describe her unique and heartfelt style – not to be missed.

Josh Teskey says “Sam sings the guitar” – and that rings so true. Sam anchors The Teskey Brothers with deft retro-soul guitar licks – earthy and pulsating, yet never cluttered and wasteful – he makes each note count.

Ash always delivers a set full of raw, grungy, powerful Blues. A devotee since his first recording with his father – a cover of Howlin’ Wolf’s ‘Going Down Slow’. He lights up a stage with his guitar solos.

Rick Brewster works his classical piano training into delivering, time after time, trademark rock n blues riffs with The Angels. Not just the shredder, but the co-composer of so many of their songs.

Harts is an extraordinary electric Blues shredder who was mentored by Prince. He has already shown us his explosive guitar-shredding wizardry at previous Bluesfests – this time we get to see him rock the Hendrix!

From child prodigy to mature axe-wielder, it’s been a long journey for Nathan, as we all saw on ‘Australian Story’ recently –  but the end result shows that his staggering talent is back better than ever.

Another Bluesfest family favourite, Xavier Rudd is seated behind a forest of instrumentation and his crafted guitar work sits atop layers of percussion, blues harp and vocals. He also delivers equally powerful messages.

This LA-based, pocket rocket displays an extraordinary soulful roots feel in her playing, pairing perfectly with her husky vocals and live performance magnetism.

Multiple ‘Chain Blues Award’ winner, Ray Beadle’s guitar work is breathtaking! His playing is ‘all heart and soul’ and ‘rich with a deep history of the Blues’ –  a MUST-SEE at Bluesfest 2021!

50+ years at the top doesn’t go unnoticed! Phil Manning is a statesman and icon of Australian blues. ‘Go-to’ session lead guitarist, all point towards his dexterity and skilful touch on the guitar.

He may not be a household name – BUT every one of you will have certainly heard him at full throttle… firstly with Powderfinger and now with The Church. Come see for yourself at Bluesfest next Easter!