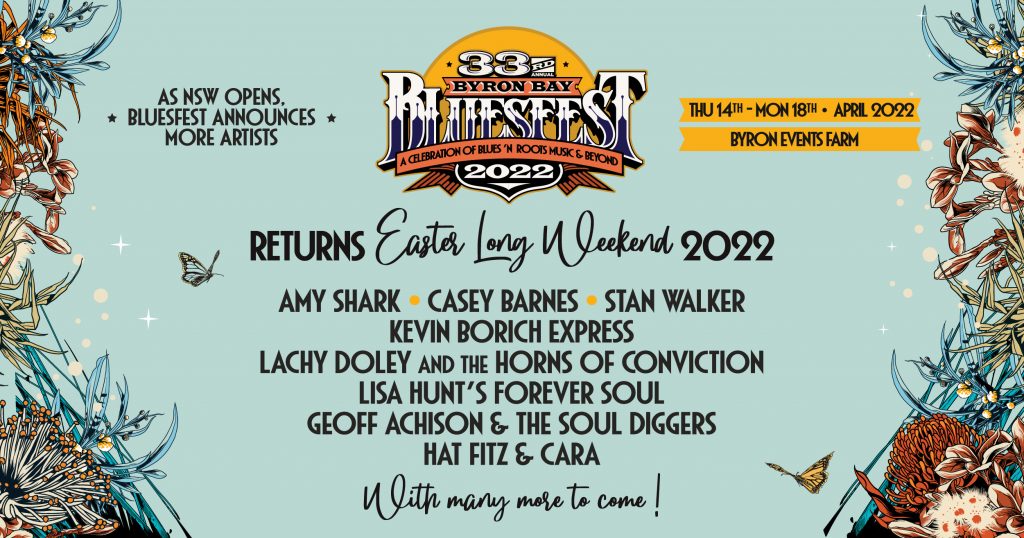 This morning Bluesfest is excited to announce that, as NSW opens, we have added another EIGHT AWESOME ARTISTS to the already amazing lineup.

We have now announced 82 artists who, between them, will perform over 130 shows across the festival days. And hold tight, there’s more… Our special THURSDAY artist announcement is coming next!

Starting with AMY SHARK – a super talent who is exploding across the world. A multi-award winner (with 8 ARIA’s from 22 nominations, 4 APRA Awards from 10 nominations and the AWMA Breakthrough Artist Award) and a formidable songwriter. Amy’s latest album, ‘Cry Forever’, sees her teaming up with blink-182’s Travis Barker on the gold-accredited single ‘C’MON’ and global superstar Ed Sheeran to co-write platinum single ‘Love Songs Ain’t For Us’ featuring Grammy award-winning artist Keith Urban! 🤩

Australia’s newest country-rock superstar, CASEY BARNES, also makes his Bluesfest debut next Easter. His undeniable talent, paired with iconic foot-stomping performances, and his happy-go-lucky attitude have all attributed to his ongoing success in Australia and abroad. His latest country energetic single ‘Come Turn Me On’ awarded him his fourth consecutive single within the last 8 months to hit #1 on both the Global Country Music Network Charts and the Air 100% Independent Singles Charts. He’s a powerhouse and his high-octane live show is not to be missed.

15 years ago, a young STAN WALKER played Bluesfest as part of our High School Showcase. Now the Trans-Tasman pop RnB star returns for the first time in his own right, as a multi-award winner (with 7 victories from 25 nominations)… and this week added two more Waiata Māori Music Awards to his award collection!

KEVIN BORICH has been thrilling audiences with his dynamic Rock, Blues and Funk … and blistering boogie, ever since he came over the Tasman with the La De Das and their anthemic ‘Gonna See My Baby Tonight’. He has been lauded globally for his guitar virtuosity and has shared the stage with the greats, such as Santana, Bo Diddley and Richie Blackmore (Deep Purple)… and has opened shows for Elton John, Jeff Beck, Buddy Guy and Peter Frampton. Together with his ‘A Team’, Jon Carson (drums, vocals) and Chris Gilbert (bass, vocals), the KEVIN BORICH EXPRESS leave audiences wondering just how 3 performers can create such inescapable sounds, mixing Rock, Blues & Funk.

LACHY DOLEY is omnipresent at Bluesfest: he is the go-to keyboard wizard for many top Australian artists. In between touring and sessions for others he fronts The Lachy Doley Group. His latest album ‘Studios 301 Sessions’ debuted at #1 on the ARIA Jazz & Blues Albums Chart. This time at Bluesfest, Lachy Doley has supercharged his group with an electric 4-piece horn section, 2 amazing backing singers and some screaming blues guitar to create LACHY DOLEY AND THE HORNS OF CONVICTION. All the soul and energy of the power trio but with a whole lot more class, more excitement, and more power.

LISA HUNT is one of our ‘almost’ local stars with an incredible loyal following. Former Byron Bay and now Gold Coast resident, New York-born Lisa Hunt has sold over a million records and shared stages with the likes of Pavarotti, Ray Charles, Eric Clapton, James Brown, Miles Davis, Dionne Warwick and Zucchero, with whom she worked as a featured vocalist for many years. LISA HUNT’S FOREVER SOUL – a Rhythm and Blues Retrospective, comes to Bluesfest next Easter.

For the real traditional Blues-lover, you can’t go past GEOFF ACHISON AND THE SOUL-DIGGERS. Geoff and his top-shelf band have been dishing out the Blues across the globe for the last 30 or so years and we are happy to have him back playing Bluesfest.

… and finally, HAT FITZ & CARA. Fitz has played at more than half our total Bluesfest’s and with his powerhouse drummer, vocalist (and wife) Cara they have rocked our stages several times in this past decade. Classed as Convict Rhythm and Roots they are among Australia’s most talented Roots music artists; with Fitz’s weathered vocals and soaring, Blues-soaked guitar combined with Cara’s pounding drums and soulful honey-coated voice. They are a real treat to see – don’t miss this ‘dynamic duo’.