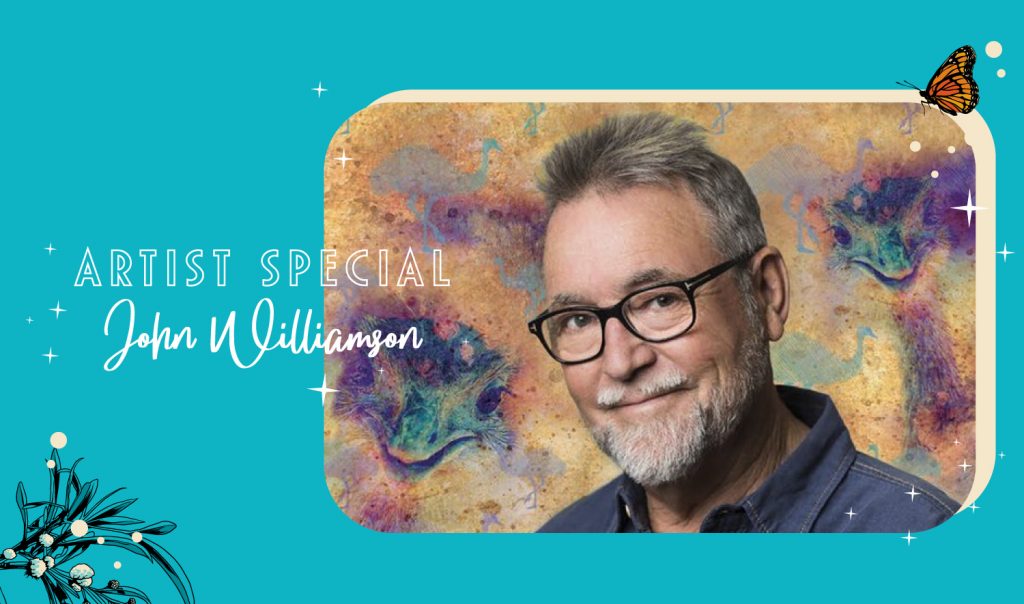 “My whole life has been about loving Australia, and loving being an Australian”

Next year marks Australian music icon John Williamson’s 51st anniversary in the entertainment industry and foresees him closing the book on his regular touring – and what better way to celebrate than at Bluesfest 2021.

Way back in 1970, when John Williamson wandered into Richmond’s GTV9 studios with a guitar under his arm, little did the Mallee-born farmer realise he’d make a 50+ year career out of singing and performing. His performance of ‘Old Man Emu’, the first song John had ever written, on Channel Nine’s popular New Faces program resulted in a number one single as well as a record deal. It also marked the appearance of a striking new talent: the unofficial custodian of Australian stories.

Half a century on, John Williamson has made an art of expertly capturing Australia in song. Painting lyrical pictures of our unique fauna and flora, landscapes and people, John has encapsulated the beauty, wonder and, sometimes, the heartbreak of life Down Under. From boabs to billabongs and snowy mountains to sandy beaches, his 52 albums – including 20 original studio albums – have traversed Australia like a dust-covered road train, deftly moving between larrikin humour and touching pathos.

“While I’m not looking to retire just yet, once I’ve completed my 2021 The Winding Back tour I’ll be scaling down my live appearances,” John says. “I’ve always loved the connection I receive when performing, so you’ll still see me popping up at festivals and special events. ‘The Winding Back’ means I’m looking forward to spending more time in the garden and less time away from home.”

‘The Winding Back’ tour takes in more than 40 dates across Australia through to the end of 2021.

With his honours including the ARIA Hall of Fame, an Order of Australia, 28 Golden Guitar Awards, Australian Roll of Renown induction, not to mention over 5 million albums sold and thousands of shows performed, it’s hard to begrudge the 75-year-old a less hectic schedule. First, though, there’s a 51sth anniversary to celebrate.

“One day I had a go at writing an answer to Rolf Harris’s ‘Tie Me Kangaroo Down’ and came up with ‘Old Man Emu’. I never attempted to write a song before that, and the night that I performed it first in the Imperial Hotel I had to sing it three times. Two encores of the one song. They wouldn’t let me go until I sang it again. I signed a contract to record it. It went to number one straight away for about five weeks.”

Ever since then, parents have been playing ‘Old Man Emu’ to their kids. But now, they can read it to them too – with the classic being turned into a beautifully illustrated book a few years ago.

“I’ve never written a sillier song, really,” Williamson said. “I was surrounded by emus and kangaroos at the time back in 1969, and I released it in 1970. Simon McClain (the illustrator), who lives on the Gold Coast, is an amazing artist. His animal drawings are beautiful. My favourite page is the tawny frogmouth, and you’ve got to turn it upside down to see the fruit bats sing.”

John Williamson doesn’t have any rules for writing his songs, but says he tries to avoid creating anything that “sounds too samey” – which is easier said than done when you have a catalogue containing hundreds of songs.

“Sometimes I’ll start with a melody and I will think, hold on, I’ve stolen that from one of my own songs! Good melody, good rhythm will always be there. My challenge now is to keep writing songs that are as good as in the past.”

“Story songs, with a catchy chorus and reasonably simple melody, will always last.”

It doesn’t matter where you are in the world, what day it is, or what time… if you feel the slightest bit homesick there’s only one person to turn to.

Here are some comments from John’s fans on YouTube:

“Wherever you are in the world listen to a song by John and you’re back home.”

“John’s poetry of the Australian country is a treasure.”

“His songs and lyrics are a painting.”

“It sounds better when you’re standing in a crowd listening to this true blue Aussie who knows the true meaning of Australia.”

“His storytelling so perfectly depicts this beautiful country, that when I close my eyes, I can hear the bellbirds and smell the gumtrees.”

John Williamson, the ‘Mallee Boy’, is passionate about the bush and its protection.
“I have a conviction about things and it doesn’t bother me who gets upset by it. In fact, I suppose if you make a statement that is controversial, you expect that. I hope there are more positives than negatives – that’s what I’m told anyway. I’ve never bothered about negative people.

I come from the folk era where we write songs about things we feel, things that are important to us not just love songs or songs to make hits. If these songs are hits than that’s great but that helps the cause more than anything else. I write about 1% songs like this; it’s amazing how much publicity you get out of the one per cent.”

Considering ‘This Is Australia Calling’ was released back in 1992, the message rings loud and clear and as relevant today as the day it was released.

Perhaps John’s greatest legacy is making Australians proud of their country and of who they are. He captures the essence of ‘Australiana’, the characters, the colours, the smell and personas that he sees in Australian culture; capturing them poignantly and elegantly, and with an innate ability to reflect the social and cultural landscape prevalent at the time.

John Williamson is, without doubt, a National Treasure.

“You’ve got to get out there and fight for what you like. But I think, the more experience you do, the more things you do, the more chance you’ve got of finding out what your real talent is. Don’t worry about money so much, just try and find something that makes you happy.

“I actually dreamed that I was going to be a wheat farmer like my dad. There was nothing wrong with that. I loved that too. A very tough life.

“You can work 12 hours a day for a year and then the crop fails and you might as well have sat on your butt for the whole year and you’d have been better off but I think that’s characters building. I think that has been very much a part of how I’ve handled this showbiz pretty easily because it’s nowhere near as tough as farming, I can tell you that.