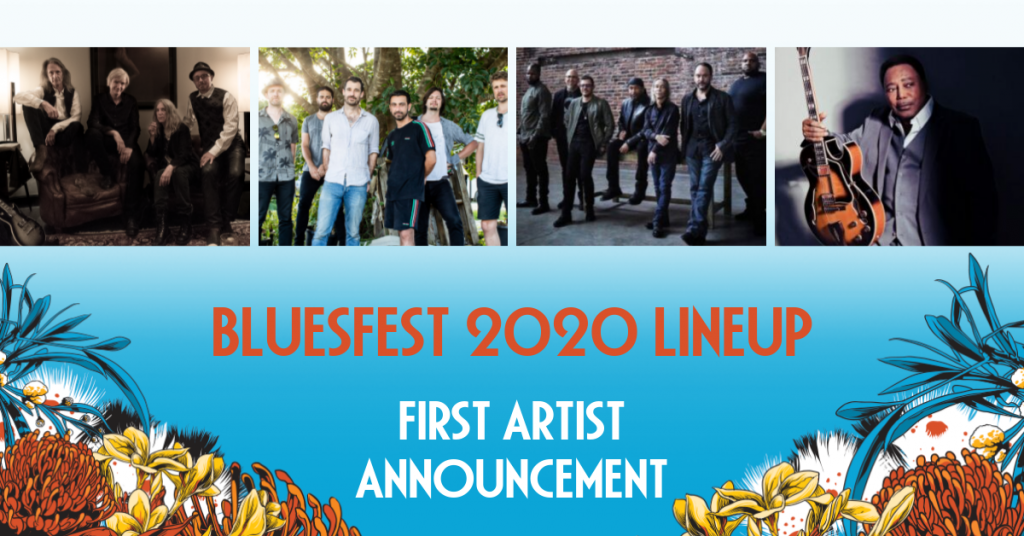 The wait is over! JUST ANNOUNCED for Bluesfest 2020 is…

Get to know the Bluesfest 2020 lineup!

There is only one type of Dave Matthews Band (DMB) fan and that is a hardcore one! Bluesfest is incredibly excited to have the industry powerhouse play at the 2020 Bluesfest and we know the masses of fans who have been requesting the jam-loving Rockers presence at the festival year-on-year will be too. It’s going be Dave Matthews Band’s third visit to Bluesfest and if the two earlier visits are anything to go by it’s going to be more of the same – a tent full of happy, dancing Bluesfesters.

As Peter Noble, Bluesfest Festival Director puts it: “The Dave Matthews Band are one of the top grossing, most in demand bands in the world – and finally they are coming back to Bluesfest. This is going to be magical and UNMISSABLE.”

It’s been 10 years since Crowded House headlined Bluesfest – and we can’t think of a better artist to lead us into Bluesfest’s fourth decade than these multi-award winning national treasures. BRIT award winners, MTV Video Music Award winners and multi APRA and ARIA award winners, their albums and songs have been cornerstones of most of our collections and their anthems such as “Don’t Dream It’s Over”, “Weather With You” and “Better Be Home Soon” are globally lauded. There’s only one place to be when Crowded House hit the Bluesfest stage – front and centre!

Patti Smith and Her Band

Patti Smith and her band conquered Bluesfest in 2017 and went on to win the Helpmann Award that year for Best International Contemporary Concert. Best-selling author, performance poet and visual artist, Patti Smith’s list of artistic accomplishments doesn’t end there. She is a Rock and Roll Hall of Fame inductee, recipient of the Polar Music Prize and a human rights activist. And, just when we thought it was all over… the legend that is Patti Smith calls and says: “I’d like to do it all over again. I’m ready if you are!” How could we refuse! So, with open arms, we welcome back the Godmother of Punk to Bluesfest 2020.

We are so excited to welcome the legend that is George Benson to Bluesfest. Since 1977, the self-proclaimed ‘R&B Jazz cat’ has won 10 Grammy Awards – and has been nominated for an additional 15. Following the success of his Quincy Jones-produced pop album ‘Give Me the Night’ in 1980, George Benson’s string of pop hits includes “Love All the Hurt Away,” “Turn Your Love Around,” “Inside Love,” “Lady Love Me (One More Time),” and “20/20.”  In 1990, he was awarded an Honorary Doctorate of Music from the Berklee College of Music and in 2009 the National Endowment of the Arts recognised him as a Jazz Master, the nation’s highest honour in jazz.

Brandi Carlile is returning to Bluesfest and we couldn’t be happier. The six Grammy Award nominations for her landmark album ‘By The Way, I Forgive You’ made her the most nominated woman at this year’s Grammy awards – winning three! She says of her unique musical style, “I’ve gone through all sorts of vocal phases, from pop to blues to R&B, but no matter what I do, I just can’t get the country and western out of my voice.” Brandi Carlile has been a part of several activism campaigns and an advocate for causes ranging from spreading awareness for health issues to empowerment of women.

The Bluesfest family would not be where it is today without John Butler. Singer-songwriter, producer and activist, John Butler has brought a whole eco-awareness with him to Bluesfest with every one of his 13 previous visits. On this, his 14th Bluesfest appearance, John Butler will be performing solo, and will be featuring songs from his 2018 album, ‘Home’ as well as classic songs from his timeless repertoire. His songs speak to the issues of our time in a way that makes the spirit soar.

Celebrating his 10th appearance at Bluesfest, Xavier Rudd will be journeying through his anthemic catalogue of earthy music. The multi-instrumentalist always hits a sweet spot smack bang in the hearts of the audience. His beloved songs of spirituality, humanity, environmentalism and human rights have resonated with the Bluesfest audience and he’ll for sure get a warm, loving reception when he takes the stage next Easter.

Formed in Melbourne, and an absolute favourite at Bluesfest, The Cat Empire make a welcome return after a 4-year absence. Bound together by a love of music since their teens, The Cat Empire have made their name crafting infectious, genre-embracing anthems, releasing them on chart-topping, multi–platinum selling albums, and playing hundreds of world class, awe-inspiring shows a year. It seems The Cat Empire Brand of feel good, high energy, smile-inducing, euphoric Roots Pop has a global address when it comes to the winning of hearts. Back with a swag of favourites, and some new songs, get ready to dance yourself crazy.

Such was the joy and bliss of Morcheeba’s visit to Bluesfest in 2018 that we wanted to bring them back as soon as possible. With a music career spanning 22 years and millions of albums sold worldwide, Morcheeba are pioneers of British Trip-Hop and Soul. Morcheeba define the ‘chill-out’ genre and are the perfect antidote to a big night. Songs like “Rome Wasn’t Built In A Day”, “The Sea”,  “Even Though” and “Otherwise” have been played in cafés, lounge rooms and at Sunday sessions around the world. It’s always special when Morcheeba take to the Bluesfest stage.

We are stoked to welcome troubadour, Country Folk singer-songwriter John Prine to Bluesfest. Widely cited as one of the most influential songwriters of his generation, John Prine is known for heart-string pulling lyrics about love, life, and current events, as well as tales from his life.  Since day one, John Prine has been a storyteller, not just between songs but within the songs themselves, and that’s what gives them such power.

We’re jumping up and down to welcome California Indie Rock icon Jenny Lewis to Bluesfest for the first time next Easter. There is no doubt she will mesmerise audiences with songs from her critically acclaimed new solo album, ‘On the Line’. Jenny Lewis is renowned for her storytelling, with captivating songwriting, sung beautifully and told with biting detail. She is a showstopper and will no doubt will be a highlight of Bluesfest 2020.

“Frank Turner writes folk songs that harness the fury of punk and the majesty of Springsteenian rock ‘n’ roll. But more than anything else, his music is playful.” –  NPR. Last seen at Bluesfest back in 2014, Punk-Folk poet Frank Turner brings songs from his latest album ‘No Man’s Land’ and the bawdy rowdiness of songs such as “Recovery”, “If Ever I Stray”, “I Still Believe” and the incisive ‘The Way I Tend To Be’ to Bluesfest 2020. Don’t miss Frank Turner… you will regret it!

John Mayall first came to Bluesfest in 1991 for the second Bluesfest. The man whose name is synonymous with the Blues, especially the UK Blues scene, is credited with some of the greatest Blues line-ups. His band The Bluesbreakers included the likes of Jeff Beck, Peter Green and Eric Clapton. Now, 37 albums down and in his 7th decade of performing, we are stoked he could find time to once again deliver his own Blues Masterclass.

Buffy Sainte-Marie is touring constantly, and coming off her critically acclaimed, award-winning album ‘Power in the Blood’, nobody could ever accuse the Academy Award-winning songwriter of taking it easy. Since her groundbreaking debut, 1964’s ‘It’s My Way!’, the Cree singer-songwriter has been a trailblazer and a tireless advocate, an innovative artist, and a disruptor of the status quo. Alongside her latest album, ‘Medicine Songs’,  her timeless songs – ‘Universal Soldier’ and ‘Up Where We Belong’ are just the tip of an iceberg size songbook – classics from which we are sure to hear.

South Carolina born and bred and a fourth generation musician, Marcus King delivers a Southern fried brand of Blues with a Rock’n’Roll edge. The five-piece band gives a blistering yet soulful live performance that has been honed through endless touring. With their musically enthralling new album ‘Carolina Confessions’, Marcus King and his band are bringing their own unique style to the proud legacy of American Rock and Soul music.

New Jersey-born Walter Trout spent decades as a sideman before launching an epic Blues-Rock solo career. A Canned Heat guitarist in the 1980s, he released his debut album ‘Life In The Jungle’ in 1990, and hasn’t looked back since. His health went downhill in 2013 due to liver failure, but after a successful transplant, he was back on his feet with ‘Battle Scars’ and ‘Survivor Blues’, which includes his rendition of Jimmy Dawkins’ “Me, My Guitar and the Blues”.

With the Blues in his blood, 20-year-old guitarist, vocalist and songwriter Christone “Kingfish” Ingram is set to take the music world by storm. His debut album, ‘Kingfish’, showcases Ingram’s blistering, raw and inspired guitar playing, soulful, deep vocals and songwriting. Bluesfest is lucky to lock in this amazing new talent whose retelling of the Blues whilst still proudly holding the torch of his predecessors is shaking the genre to its core.

We’re so delighted that, following their unexpected cancellation for 2019, Greensky Bluegrass will be coming to party with us next Easter! This five-piece jam band are well-known for their electrifying live shows that showcase their versatility and each member’s technical excellence. A live force of nature renowned for bringing Rock’n’Roll showmanship to high-energy bluegrass, the two decades they’ve spent together honing their craft really shows.

Larkin Poe left Bluesfesters breathless after each performance so it’s no wonder we are rapt to have the dynamic sister duo of Rebecca and Megan Lovell return in 2020. Larkin Poe has opened the door to a dark, portentous Blues that has an enjoyable yet sinister tone, not unlike their ancestor, Edgar Allan Poe. Often referred to as “the little sisters of The Allman Brothers” – don’t miss Larkin Poe and their beguiling mix of Gothic soul and outlaw country.

The War and Treaty

The War and Treaty were absolutely one of THE discovery artists of last year’s Bluesfest. So it was a ‘no-brainer’ to ask lovebirds Michael and Tanya Trotter to return next Easter. The War and Treaty deliver live shows and records that make the hairs on the back of necks stand up. Their music and stories bring tears and goosebumps, but ultimately, more is at work. Facades melt away. Walls are torn down. The War and Treaty are a must-see!