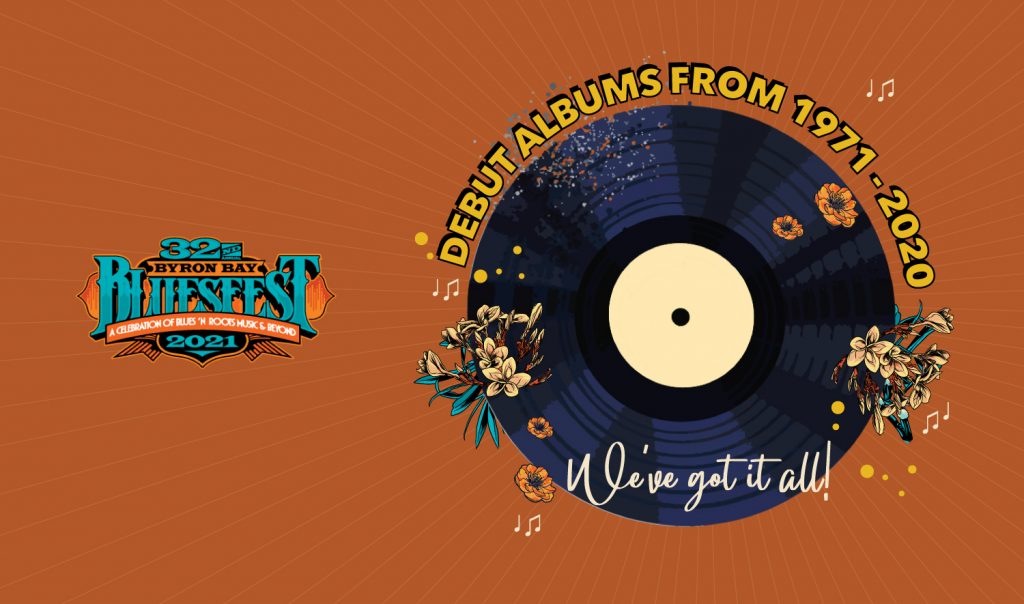 From where they all started… our artists have debuted albums from all the way back in 1971 up until just last year! Bluesfest 2021 has got it all!

This is the first studio album from Chain, which followed a very well-received live set ‘Live Chain’ recorded a year earlier. Since the late sixties and early seventies, Chain has been the most influential Blues-Rock band in Australia. Exciting driving rhythms, soaring harmonica and guitar, all complimenting the powerful vocals of Matt Taylor – this album set the bar higher than any Australian Blues band before or since. With unforgettable songs like ‘Black and Blue’, ‘Judgement’ and ‘Snatch It Back and Hold It’, we reckon it’s probably the longest permanently available Blues-Rock album in Australia.

After Jo Jo Zep & The Falcons disbanded, Jo Jo (or Joe Camilleri) put together a ‘pick-up’ loose band of musicians and called them The Black Sorrows, who started out playing gigs to raise cash to make an album.

That album was ‘Sonola’ – and cost a princely $1300 to make! Check out their unique take on Van Morrison’s ‘Brown Eyed Girl’, Dinah Washington’s ‘What A Difference A Day Makes’ and John Lee Hooker’s ‘Don’t Look Back’.

“I just wanted to have some sort of documentation that we existed. We did the artwork and screen-printed the covers. We’d put the covers on the line, one side only, waiting for them to dry, so we could do the other side. They’re the things you cherish, waiting for the record to be pressed and then having a lounge-room full of records and freaking out because you want to get rid of them.” – Joe Camilleri

“The best Australian-Rock debut since Skyhooks’ Living in the ’70s” – Billy Pinnell, musicologist.

Punk-Folk-Rock… Weddings Parties Anything evolved from the Melbourne punk scene in 1984, melding punk roots with founder Mick Thomas’ original love for the honest storytelling in folk music and quickly became known for their explosive live performances. Their live following grew and the ever-growing number of ‘Weddheads’ made enough noise that this debut album, originally slated as a minor indie release, was picked up by a major record label and helped score for them their first ARIA award for ‘Best New Talent’. It’s a riotous combination of story-telling and hardcore music, featuring the songs ‘Away Away’, ‘Hungry Years’ and ‘Scorn Of The Women’.

“Arguably the best protest album ever made in Australia” – Bruce Elder

Kev Carmody is a member of the Stolen Generations. Despite leaving school almost illiterate he immersed himself in music and learning – and now has a PhD in history and is a member of the ARIA Hall of Fame. This debut album is as passionate and relevant now as it was at the time of its release (to coincide with the bi-centenary in 1988), and contains powerful, emotive songs such as ‘Thou Shalt Not Steal’ , “Black Deaths In Custody’, ‘Pillars Of Society’ and ‘Jack Deelin’, all laying bare the street-level reality of the oppression and ignorance facing indigenous people.

“This was a very powerful record by someone who’s the Aboriginal poet laureate of his time, and it’s as pungent and as stirring and as evocative and as absolutely ‘on’ today as it was when it was first written.” – Peter Garrett, Midnight Oil

After Cold Chisel disbanded in 1983, Ian Moss took a break. He started playing again in Oct 1986, but the recording didn’t start until 1988 when he spent 9 months in LA preparing material for his debut solo album. 2 singles, ‘Tucker’s Daughter’ and ‘Telephone Booth’ were released prior to the album’s release in August 1989. Both singles charted (as did several others) and the album sold over 200,000 copies and topped the ARIA charts for 3 weeks.

In the following ARIA Awards, Ian Moss won in five categories: Album of The Year, Single of The Year, Breakthrough Artist (single and album) and Best Male Artist. These first songs from Ian Moss are still staples of his live performances – and radio plays. 2021 sees the continuation of the delayed 30th anniversary Matchbook Tour.

From street corners to the world stages – that’s the “rize and rize” (IYKYK) of the urban Reggae-Roots ensemble Blue King Brown. Starting life as a percussion-based ensemble busking on the streets of Byron Bay, BKB has now recorded and performed all over the world. ‘Stand Up’ was nominated for the J Award of 2006, and ‘Come and Check Your Head’ was listed No. 100 on the Triple J Hottest 100 of the same year. This exposure zapped them into the national consciousness with their passionate and uplifting messaging, as heard in ‘Come And Check Your Head’, ‘Stand Up’, ‘One Day’, ‘Water’ and ‘Keep It True’. The adventure continues with their latest album ‘Born Free’.

Ray Beadle is a cherished favourite among Australian Blues fans. Since the age of 9, he has toured, written and performed consistently. He is music rich with a deep history of the Blues, with mastery and deep understanding of his guitar – the instrument that delivers. His debut album released in 1998 gave us all a taste of what was to come… featuring a set of stripped back acoustic songs including ‘Moving On’, ‘What U Got’, ‘That’s My Girl’ and ‘Blues On My Mind’.

He has held a residency at BB King’s Club in Memphis, shared the stage with many of the great Australian and International artists, and made the semi-finals of The Blues Challenge in Memphis.

Formed in 2003 this juggernaut orchestra made us wait 10 years before unleashing their eponymous debut album. They honed their craft and sound under the leadership of Nicky Bomba, and the cohort of up to 33 members scintillatingly and unashamedly easily captured their visual and madcap live atmosphere on their debut recording with songs like: ‘Get Smart’, ‘Lygon Street Meltdown’, ‘Third Time Lucky’, ‘Papa’s Got A Brand New Ska’ and ‘He’s A Tripper’.

Honing their skills on Australia’s busking street corners, twin brothers Jack and Pat Pierce have gone on to conquer concerts and festival all over the world – and they’ve supported artists like The Cat Empire, St Paul and The Broken Bones and Tash Sultana. There was a shopping basket of singles and EPs which matched this continuous touring schedule and growing fanbase… and this first album only endeared them to many more fans, making its debut on the ARIA charts at #13 with songs like ‘Trip Lovers’, ‘Back End Roads’, ‘Juno’ and ‘Waiting’.

All Our Exes Live in Texas

‘The most badass girl folk group ever” – Hhhappy.com

All Our Exes Live In Texas are four of Australia’s finest singer-songwriters, Elana Stone, Katie Wighton, Hannah Crofts and Georgia Mooney. Formed in 2013, AOELIT’s non-stop touring calendar, working alongside Passenger, Midnight Oil, St Paul & The Broken Bones, Nathaniel Rateliff and The Night Sweats resulted in this critically-acclaimed debut album, ‘When We Fall’. It is four-part indie-folk harmony heaven, matched by the strength of their composing, which went on to giving them their first ARIA Award for Best Blues and Roots Album as well as an AIR Award for Best Independent Blues and Roots Album – not surprising with songs such as ‘The Devil’s Part’, ‘I’m Gonna Get My Heart Cut Out’ and ‘Tell Me’.

We’ve said it before… these guys seemingly came out of nowhere to take the Australian Music Industry by storm, driven by this breathtaking debut album ‘Half Mile Harvest’. Written by the four members of the band, recorded in their home studio on analogue tape, self-produced and released independently… every track on this album is outstanding! The mix of the old-school Stax and Motown sound is heady and infectious and has brought them millions of fans the world over. Check out our faves ‘I Get Up’, ‘Crying Shame’ and ‘Pain and Misery’.

What seems like a perfect match, the ‘coming together’ of Josh Teskey and Ash Grunwald was as organic and natural as you can imagine. While simultaneously working on other projects, the two were side-tracked by the ease of writing together, likely because of their shared love of the same musical heroes and similar journeys throughout their own musical careers. Between the two are 11 studio albums, 4 live albums, numerous worldwide award nominations and a touring map covering probably every city you can think of.

For the first time, Josh and Ash will perform live together, celebrating and bringing to life their album ‘Push The Blues Away’, which was released in November 2020. As well as the title track and ‘Thinking ‘Bout Myself’, be sure to check out ‘Preachin’ Blues’, ‘The Sky Is Crying’ and ‘Hungry Heart’.