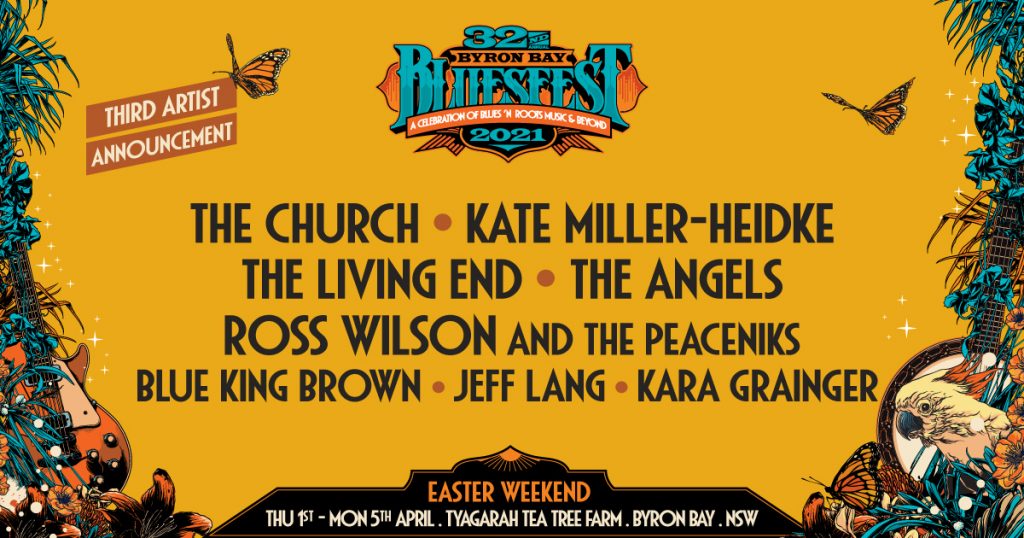 THIS LINEUP IS AN EMBARRASSMENT OF RICHES!

The 2021 Bluesfest Third Artist Announcement is a legendary list of exceptional artists who join what is already an incredible line up of Australian talent confirmed to perform next Easter on April 1st – 5th at the beautiful green Tyagarah Tea Tree Farm located 10 minutes north of Byron Bay.

Commenting on the announcement Festival Director, Peter Noble OAM says “Look at this line up – all that talent. When it comes to musical talent Australia is an embarrassment of riches and it is a privilege to create a line up to clearly showcase that very fact.”

This will be the first time THE CHURCH play Bluesfest and you can expect the best from these Australian psych-rock guitar masters. Regarded as one of the best bands ever to come out of Australia The Church enter their fifth decade of making music with all the fierce creative energy of their early years. At Bluesfest you will literally get the chance to watch them perform under the milky way.

She is the multi- award winning singer-songwriter and Euro Vision 2019 success story that will give the Bluesfest line up a touch of eclectic class and sophisticated drama. KATE MILLER-HEIDKE’s shows are always captivating and leave you feeling like you just got a big drink from the cup of her creative smoothie.

These chart-toppers who blend rockabilly and punk are said to be one of Australia’s most ferocious live acts. Their blistering performances have earned the band an enviable position as one of Australia’s greatest live bands. It will be THE LIVING END’s Bluesfest debut so you can imagine – this show will go off!

‘Am I Ever Gonna See Your Face Again’, ‘No Secrets’, ‘Take A Long Line’, ‘Comin’ Down’, ‘Shadow Boxer’ – we all know these legendary tracks. THE ANGELS -led by founding members John & Rick Brewster on guitars, and Dave Gleeson from the Screaming Jets on vocals – are one of the most beloved rock bands in Australia. They are fierce and uncompromising. This will be their first ever Bluesfest show!

Ross Wilson and the Peaceniks

With no less than 26 ARIA Top 40 hits to his credit as a singer, songwriter and producer, ROSS WILSON is a bona fide legend and one of Australia’s most awarded and respected artists! ‘Eagle Rock’, ‘Cool World’, ‘State of The Heart’, ‘Chemistry’, ‘No Time’, and ‘Come Said The Boy’ Ross Wilson has never been out of the limelight.  Come Back Again to see an absolute solid gold legend of rock and his full band, THE PEACENIKS perform all his hits this year at 2021 Bluesfest.

“Bluesfest is one of our favourite festivals on the planet. We’re looking forward to returning to Australian shores and bringing the full power BLUE KING BROWN show home!” says Nattali Rize

With 14 Bluesfest performances behind him, the first in 1994, JEFF LANG is a legend in his own right. Said to play the guitar with the devils in his fingers Jeff has won three ARIA Awards and his live performances are always a guaranteed showstopper.

Some people just have music running through their veins and KARA GRAINGER‘s soulful vocals and unique style of slide guitar has caught the attention of many well renowned artists – Peter Frampton, Buddy Guy, Johnny Lang, Taj Mahal… and more. From the much loved band Papa Lips, Kara has been living in Nashville for quite a few years, and we look forward to a rare performance back here on her home soil!