The Rise and Rise of Christone ‘Kingfish’ Ingram

As of this moment, Christone “Kingfish” Ingram is up for five Blues Music Awards (BMA’s), which are regarded as the highest honour given to Blues musicians.

Last year he was nominated for a Grammy for Best Traditional Blues Album for his first album Kingfish.

This month he turns 21-years-old! 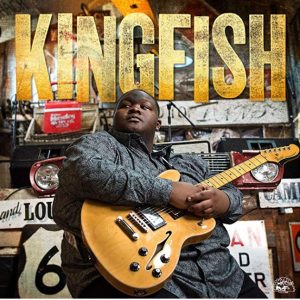 Born to do it

“Kingfish”, as he’s known to his fans and friends, started early – very early. Born in Clarksdale, Mississippi in 1999, he grew up surrounded by the music of the south. His extended family sang and performed in church and he was a regular at gospel performances.

When he was just five his dad sat him down to watch a documentary on the ‘father of the Blues’ – Muddy Waters – and his interest in Blues took root. At just six he was playing the drums At 11 years old he was playing bass and then he moved to guitar. At the tender age of 15, he was fielding offers to perform!

Single Cover for Outside Of This Town from the Kingfish Album

Blues the way it’s supposed to be

By 2015, he came to the attention of Tony Coleman who was B.B. King’s drummer. Coleman said he was playing blues “the way it was supposed to be”.  Kingfish’s friends who were into rap and hip-hop couldn’t understand why he was into traditional blues.

“They really thought it was funny, cause it was like “Man you young but you listen to that old, sad stuff.” I’m like, “Man, I ain’t really like that, I’m listening more for a culture thing, you know? This is history. This birthed what you guys listen to today, because you know rap is nothing but the blues’ grandchild.”

Taking the music industry by storm

Kingfish has had – by any standard – a huge 12 months. His debut album, Kingfish, was released in May last year where it immediately became the No. 1 album on The Billboard Blues Chart and the No. 1 Billboard Heatseeker album release. Billboard called Kingfish “a blues prodigy.” No Depression magazine said the album was “a stunning debut from a young bluesman with an ancient soul and a large presence in the here-and-now.”

Bluesfest is lucky to lock in this amazing new talent whose re-telling of the blues, whilst still proudly holding the torch of his predecessors, is shaking the genre to its core.

See “Kingfish” Thursday, Friday, Sunday and Monday at Bluesfest and witness a legend in the making.