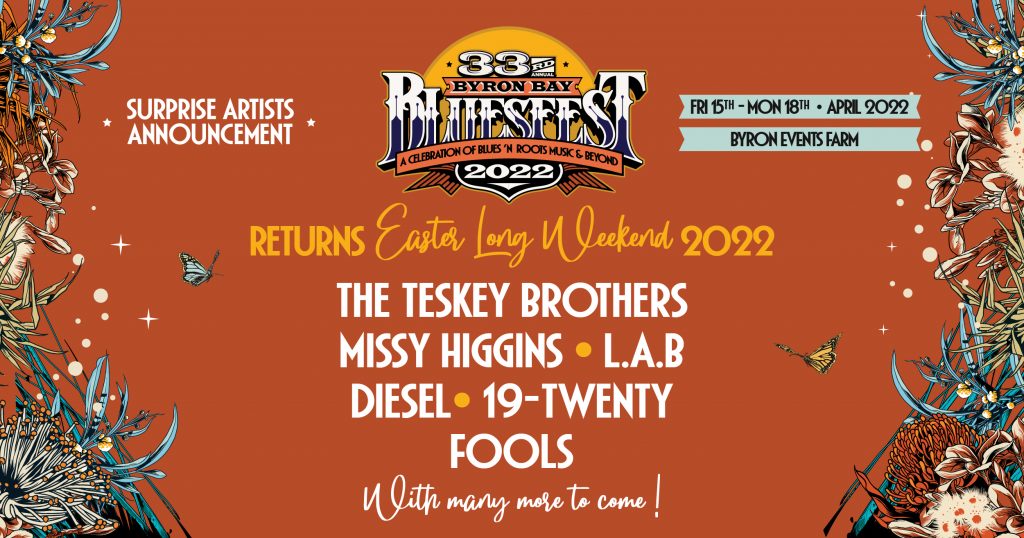 “…and there are many more to come”
– Bluesfest Director, Peter Noble OAM

We are beyond thrilled to welcome back THE TESKEY BROTHERS, as well as MISSY HIGGINS and DIESEL – all undeniably set to bring unmissable performances to Byron Bay next Easter Long Weekend.

Some more friends from NZ join us for the first time, L.A.B – ask anyone from across the ditch and they will tell you “these guys are huge!”

19-TWENTY are guaranteed to become Bluesfest favourites with their punk-rockabilly mayhem… and wait until you catch FOOLS – a super huge band fusing Rock & Roll, Blues and Soul into a dynamic live show.

COVID-19 Safety Measurements
There has been a lot of curiosity about what Bluesfest 2022 will be like – we have begun discussions with the NSW Department of Health and just like we had planned for the last few events, we will be implementing all of their requirements and will keep ticketholders informed as the planning develops.

Any requirement introduced at the time of the festival by NSW Health Department, NSW Government or the Australian Government will be fully complied with at Bluesfest 2022.

A *special* 5th-day event for Thursday night!
Don’t forget, we are working on something special for Thursday 14th April 2022, as well as the other four days… think more stages, more artists, a special event featuring all-Indigenous artists… plus a curated performance by one of Australia’s music legends! So, don’t miss out on this epic Bluesfest season – a jam-packed event from top to tail.

For those of you who are lucky to already have tickets from the rescheduled events, all of which are automatically valid for the April 2022 event, Bluesfest’s Festival Director, Peter Noble OAM has this message…

“HOLD ON TO YOUR TICKETS BLUESFESTERS! – I still have some amazing headliners to announce. It’s going to be a celebration like no other when we all come together finally, for the greatest healing when Live Music comes back.”

If you are unable to attend Bluesfest over the new dates, you will have the option to request a refund. Refunds for eligible ticketholders will be made available from Wednesday, 8th of September via Moshtix. At this time, ticketholders will receive a separate email from Moshtix with timeframes and instructions on obtaining refunds should they require.

We can assure you that even after further artists have been announced that you still have plenty of time to decide whether you wish to attend.

“Trust me though, this is the best lineup of Aussie and Kiwi talent… EVER! You won’t be asking for a refund – you’ll be asking for more tickets.” – Bluesfest Director, Peter Noble OAM

HOLD ON TO YOUR TICKETS, BLUESFESTERS! THIS IS GOING TO BE BIG 🙌 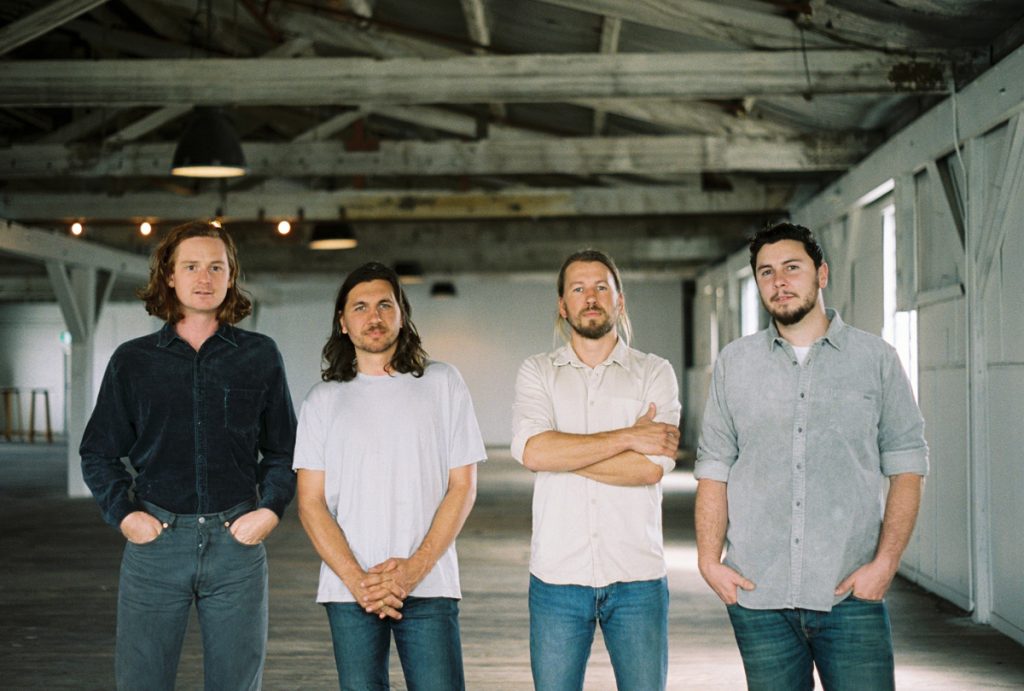 It’s fair to say The Teskey Brothers have come a long way since shows in small Melbourne bars just a few years ago. The four friends from Warrandyte have seen a meteoric rise in popularity, amassing a legion of fans all around the world with their timeless recordings and stunning live shows. Onstage The Teskeys pull out all stops, conjuring rare soulful energy and raw emotion that has fans queuing for tickets across the USA, Canada, UK and Europe. Josh Teskey’s once–in–a–generation voice defying belief as the band ignites around him. Their albums have been loved by millions around the world, earning The Teskey Brothers three ARIA Awards, four Music Victoria Awards, a Grammy Nomination, and an appearance on the Jimmy Kimmel Show. Their live album, ‘Live at The Forum’ released in 2020 reached the number one album position on the Australian charts and won for them their fourth ARIA Award for Best Blues & Roots Album.

The Teskey Brothers’ Bluesfest appearance in 2018 was one of their most memorable live performances to date and they are thrilled to be making a return in 2022. 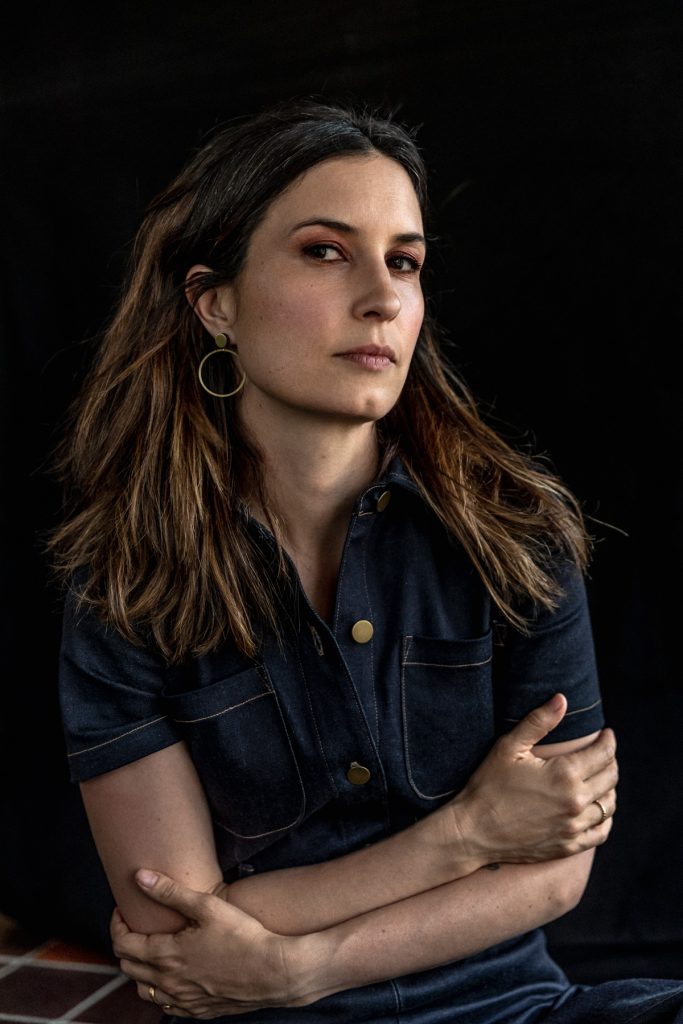 Missy Higgins is one of our most beloved singer/songwriters and her acclaimed studio albums, ‘The Sound of White’, ‘On a Clear Night’, ‘The Ol’ Razzle Dazzle’, ‘Oz’ and ‘Solastalgia‘ have sold more than two million copies. Classic songs like ‘Scar’, ‘The Special Two’, ‘Steer’, ‘Everyone’s Waiting’ and ‘Futon Couch’, plus her unforgettable live shows, have made Missy an authentic household name.

She has won nine ARIA awards and multiple APRA Awards. Missy received a Screen Music Award for Best Original Song composed for the Screen for Australian Film ‘Don’t Tell’ and contributed songs for powerful ABCTV drama ‘Total Control’. She began 2020 by releasing single ‘Carry You’ written by Tim Minchin for his TV show ‘Upright’, and capped off the year with the release of ‘When The Machine Starts’ a song focussing on positives that might be drawn from the year’s lockdown experiences. The stories Missy shares through song-writing come to life on stage as enjoyed by thousands of fans at her summer shows. 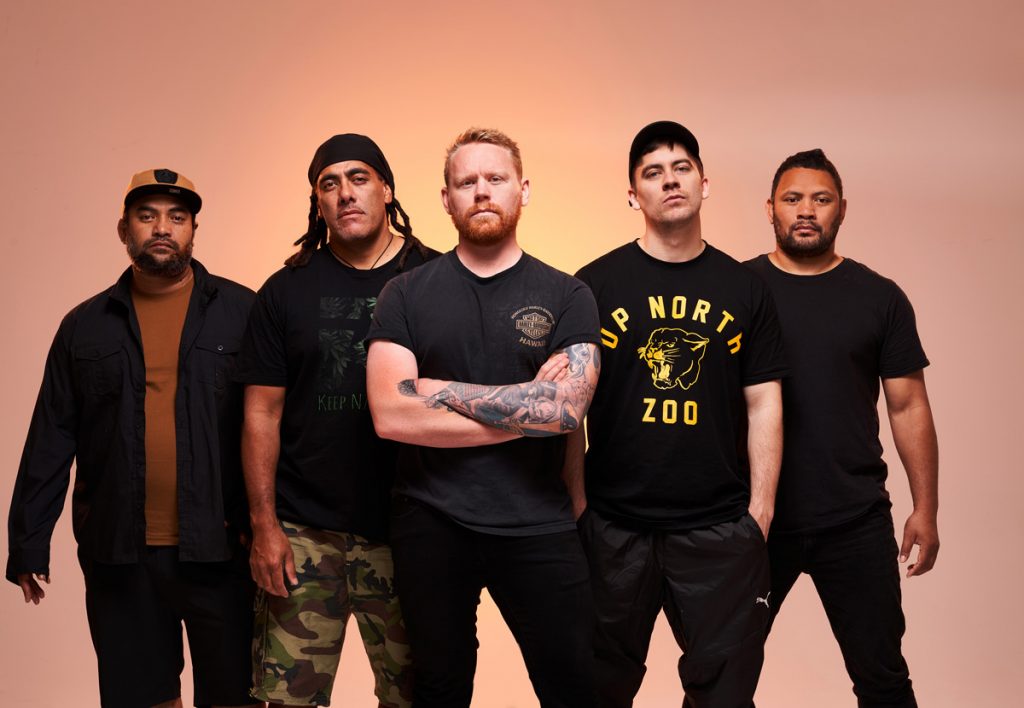 L.A.B made their name on the live stages of New Zealand and won Radio New Zealand’s publicly-voted Best Live Act of 2019; this reputation saw them play to over 200,000 people that year. Their giant hit ‘In The Air’ went to #1 early in 2020 and stayed in the charts for the whole year. L.A.B’S success story continues – selling out gigs, dominating the charts and being named Best Roots Artist at the Aotearoa Music Awards. L.A.B are definitely one band you must not miss at Bluesfest next Easter. 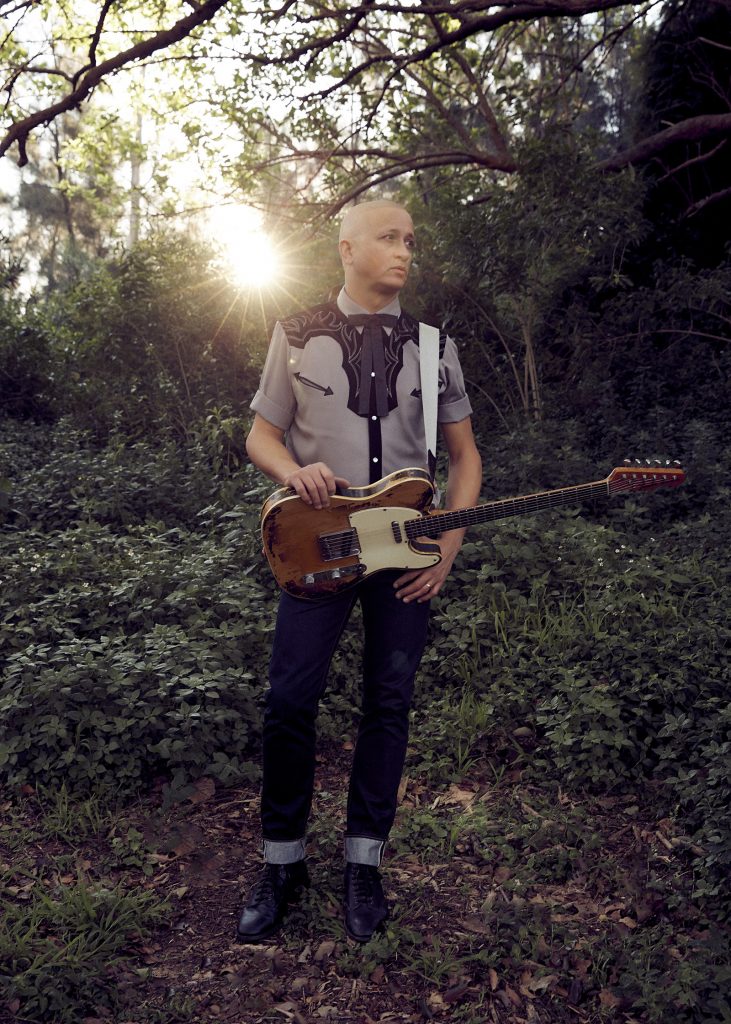 Born in Fall River Massachusetts, the youngest of seven from a sax playing electronics technician father and a mother in nursing, Mark Lizotte aka DIESEL grew up in Australia and in the U.S. He formed the band ‘Johnny Diesel & The Injectors’ in 1986 from remnants of a previous band before embarking on a solo career in 1991. In 2017 Diesel celebrated 30 years “off the bus” landing in Sydney in 1987 after a 3- day bus journey across Australia, launching into 9 shows per week – the rest is history.

With over thirty seven singles, seventeen albums, 6 ARIA awards and record sales edging 1 million, DIESEL is a journeyman of music. With blues music in his DNA, an influence largely from his Father’s record collection, DIESEL has blended styles to come up with a truly unique sound, punctuated with his distinct guitar playing and vocals 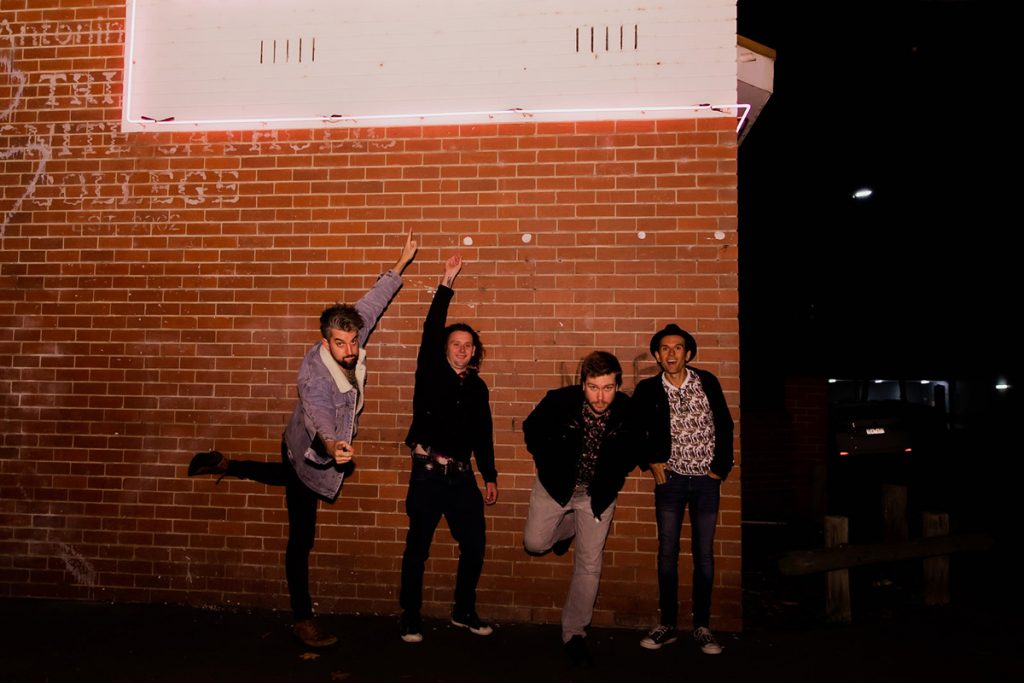 “One of the most exciting riff and groove based blues and roots acts emerging from the east coast of OZ!” – Tone Deaf

19-Twenty have been whipping up a frenzy on the festival scene. They are electric. An infectious riff and groove-based blue-billy-grass-rockin’-roots band. The 19-Twenty lads have been performing their high-energy sonic-party nationally, headlining sell-out shows and festivals in all states and territories. Constantly on the road or in the sky, they have toured seven times around Oz and performed gigs throughout Europe including Belgium, The Netherlands & Germany. Performing anywhere and everywhere, this straight-up 100% independent act have been blazing throughout Europe and Australia and gaining new music fans/fiends from their live shows. 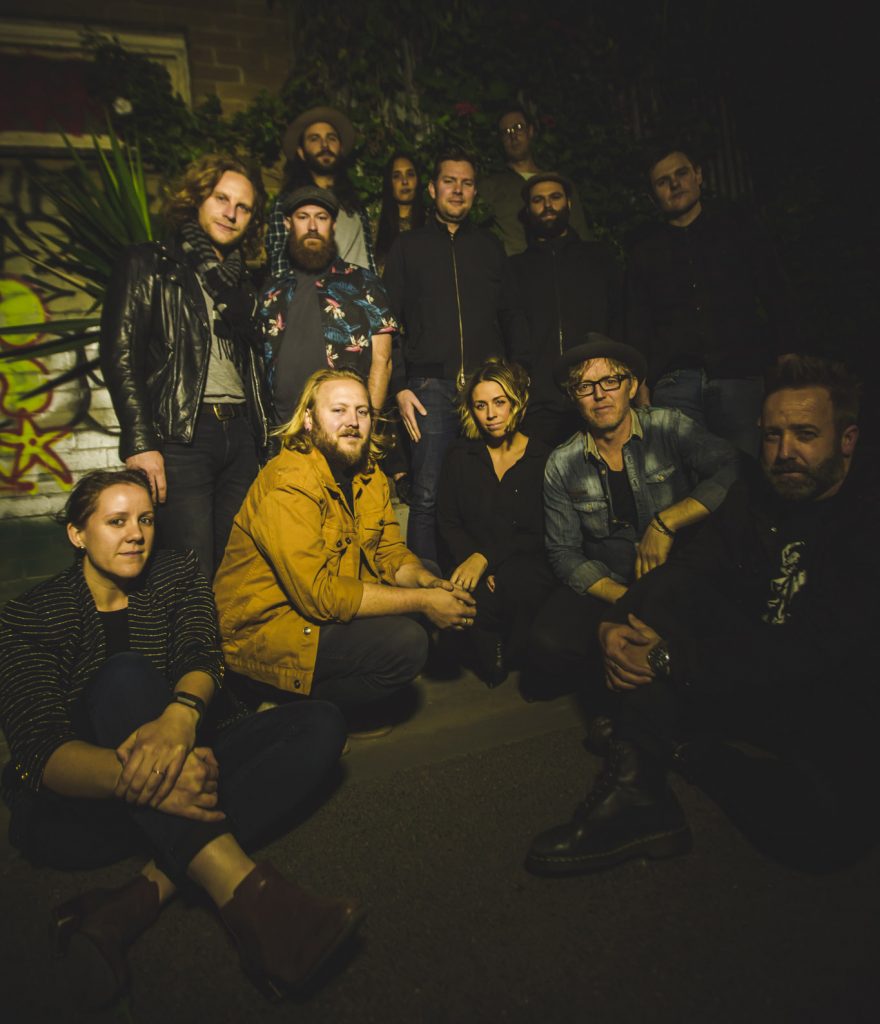 FOOLS are one of Australia’s most audacious proponents of the rock and roll genre – healthily under the influence of soul, blues and Americana, and brimming with originality and rareness.

Luke O’Connor’s voice and storytelling stands in the centre of a musical hurricane, with the energy of dual drums, guitars, hammond, backing vocals and a full horn section lending heart and detail to rare gems of songs. FOOLS perform live with command of both wildness and intimacy, and always an agreement with their audience to put on a damn good show.