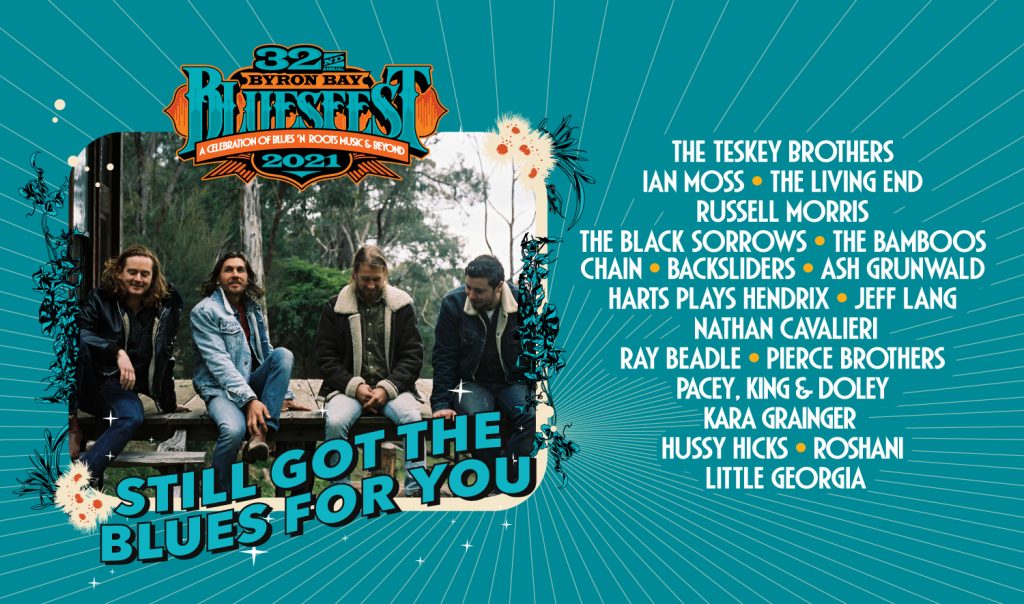 When it comes to music of any kind, Blues is the roots… and the rest is its fruits. Every year Bluesfest is proud to present some of the world’s finest Blues artists across all genres.

When you remember that all musical genres were born from the essence of Blues you can understand how wide the field of musical vision expands. Blues as we know it was a form of expression that evolved in Africa and can be heard today in the Gnawa music of Morocco, and the droning John Lee Hooker-style music of Mali.  These influences evolved in the Deep South of the United States by African-Americans with roots in African musical traditions, African-American work songs on the cotton fields, incorporating field hollers, shouts, chants, and rhymed simple narrative ballads.

Through the likes of Robert Johnson, Leadbelly, Billie Holiday, Sister Rosetta Tharpe, Muddy Waters, Howling Wolf, the three Kings; Albert, BB and Freddie, John Lee Hooker, Bessie Smith, Buddy Guy, Mississippi John Hurt, R L Burnside, Taj Mahal, Mavis Staples, Bonnie Raitt, Robert Cray and Bo Diddley (many of whom have performed at Bluesfest), and so many more legends over the decades, the Blues slowly became accepted by the mainstream and has created its own sub-genres.

So wherever your Blues taste buds happen to sit – Bluesfest has it covered!

Blues Rock with a whole lotta soul The Teskey Brothers have captivated the world with their unique and thoroughly modern take on the Blues. Their latest album Live At The Forum just went to No.1 on the ARIA Album charts.

These guys are T.H.E. originators of Aussie Blues.

The only Blues band to have a number one on Australian charts (Black’n’Blue) as well as a number two (Judgement). Formed in 1968, Chain also has the distinction of possibly the longest permanently released album in Australian rock history – ‘Toward the Blues’, which has been released since 1971 and has attained double gold album status.

Now, this is Mississippi Blues; described as “The Delta Blues Wall of Sound”

Backsliders is regarded as one of Australia’s greatest Blues outfits and consists of world-class exponents of their respective instruments; Dom Turner on guitar & vocals, Rob Hirst on drums and Ian Collard on the harmonica!

The Black Sorrows are Roots soaked Blues-rock band formed in 1984 Joe Camilleri, following the break-up of his seminal band, Jo Jo Zep & The Falcons. Originally they played mostly covers of R&B, zydeco, soul and blues songs, but original material soon followed and the hits started coming: ‘Daughters of Glory’, ‘Hold On To Me’, ‘Harley & Rose’ and ‘Chained To The Wheel’ and a whole lot more. Four decades of global touring, and millions of records sold, have turned The Black Sorrows into a formidable (and unmissable) live show.

After emerging from Australia’s Blues and Roots rock scene in the early 2000s, Ash Grunwald’s solo guitar-and-stompbox sets became a mainstay at festivals across the country. A student of the Delta blues and pioneers of electric blues, his contemporary spin on classic influences and soulful, wide-ranging vocals has earned him multiple ARIA Music Award nominations.

Little Georgia is Blues-Folk the kind which feels like it touches on the borderlands where someone like Ryan Adams crisscrosses from rock, or someone like Mia Dyson veers across blues and country lanes.

Ian Moss is a living legend, a veritable Australian icon and respected as a guitar soloist, songwriter and singer. Blues runs through this man’s veins and you can expect to feel his flow next Easter. Heads up: Considering Ian will be performing at 2021 Bluesfest on the same day as his Chisel bandmate Jimmy Barnes you can imagine how the wand that wields the onstage magic will go…our tip – don’t miss either show!

The Sydney Blues Society 2019 Best Male Vocalist and Best Song Writer SHANE PACEY has had a stellar 4-decade career fronting The Bondi Cigars, Foreday Riders and Shane Pacey Trio. He is loved by audiences all over this land. SALLY KING is blessed with an irresistibly authentic voice and vibrant stage presence. Whether singing her own songs or putting a unique stamp on classics, audiences warm instantly to Sally’s passion. 2019 Sydney Blues keyboard player of the year CLAYTON DOLEY is a killer boogie-woogie player and a super funky Hammond player who has played with some of the biggest names in the business including Steve Cropper, Joe Bonamassa and Harry Manx.

Awarded Best Album, Best Song, and Best Male Artist in the Chain Blues Awards Ray Beadle is the genuine article. His music comes deep from the heart and soul, stirring emotions in people with his guitar genius.

Pierce Brothers have taken their unique brand of folk music from busking on the streets of Melbourne to touring the world. Comprising of twin brothers Jack and Pat Pierce, the multi-instrumentalists have been shaking dance floors and selling out rooms across UK, Europe, Canada, USA and their native Australia. Their irresistible energy and world-class live show has generated a word of mouth buzz not seen for some time.

Using loop pedals to lay down guitar, harmonica, keys, percussion and a voice that gives you goosebumps, this lady knows how to sing the Blues.

Blues-meets-soul–meets- funk is what you will get from The Bamboos. Not only will they be celebrating their 21st Anniversary as a band, but The Bamboos are primed to perform new music from their 10th studio album at 2021 Bluesfest.

Prolific and accomplished Hussy Hicks are known for their emotive lyricism, energetic live shows and fiery, frenetic instrumentation, these ladies will belt out the Blues for you.

The Indian-born, Australian-based musician, singer/songwriter, multi-instrumentalist, composer, and music producer blends Blues with funk, psychedelic rock, jazz, and indie electronic and has drawn comparisons to Prince, Jimi Hendrix and Lenny Kravitz. he was invited to spend time at Paisley Park and was personally mentored by Prince. He returns to 2021 Bluesfest performing HARTS PLAYS HENDRIX.

Not easily pegged, but fair to say Jeff Lang largely trades in Blues driven Roots-oriented rock and plays the guitar like he’s got the devil in his fingertips.

B.B. King called him “the future of Blues” and he certainly lives up to the call. His musical influences of J.J.Cale, B.B.King, David Bowie, Lana Del Ray and Mos Def make for what will be an extraordinary live blues performance of a modern kind at Bluesfest 2021.

It was Russell Morris’ Australian Blues Trio of albums (Sharkmouth, Van Diemen’s Land & Red Dirt – Red Heart – which all went to number one on the ARIA Blues & Jazz charts that fully encompassed his musical genius, illuminating both the bush and the urban sprawls with his traditional Blues stories… and yes, of course, he will perform “The Real Thing”.

If you like your Blues hard, The Living End are for you!  Formed in 1994 and since 2002 the line up consists of Chris Cheney (vocals, guitar), Scott Owen (double bass, vocals) and Andy Strachan (drums. They have released seven studio albums and two reached the No. 1 spot on the Australian Albums Chart. They have also gained chart success in the United States and the United Kingdom.  Said to be one of Australia’s most ferocious live acts, their blistering live performances have earned the band an enviable position of one of Australia’s greatest live bands.

This Australian soul-blues and roots-rock singer-songwriter, currently based out of Nashville, Tennessee is said to have star power, a killer voice and guitar skills. Former lead singer of Papa Lips, Kara recently returned to Australia after spending a decade touring the world – oh and Bluesfest boss Peter Noble reckons this is definitely one show you should not miss!