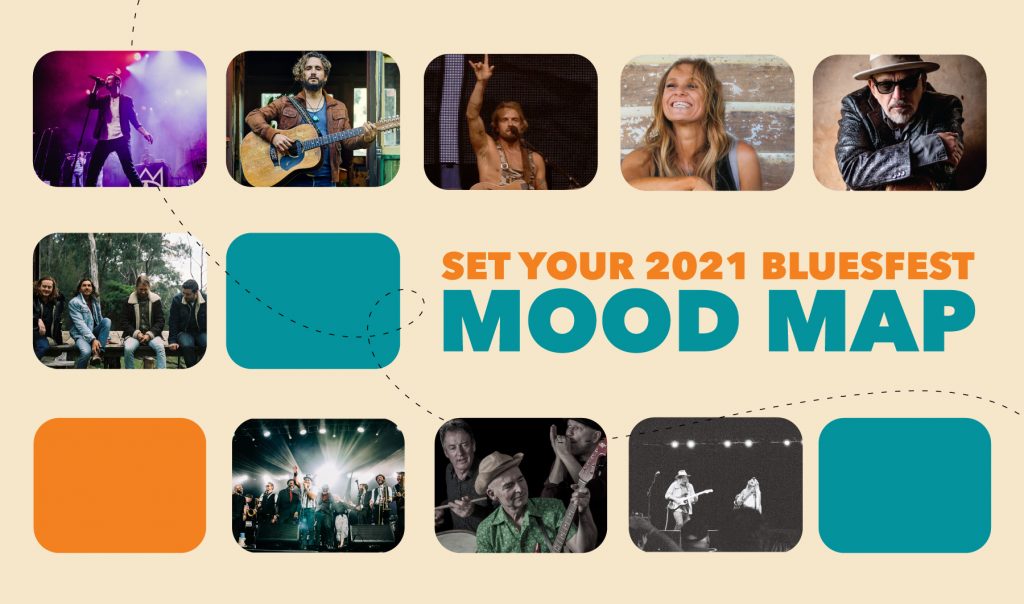 It seems The Cat Empire’s brand of feel-good; high-energy, smile-inducing, euphoric music has a global address when it comes to the winning of hearts.
Said to be one of the “best live experiences ever” their fan base only grows, never diminishes. From New York to Berlin, London to San Francisco, Paris to Montreal and beyond it is pure JOY on stage and the audience feels a part of that. These guys are vibrant, talented, self- deprecating, original, and world-class.
So when you are on the Bluesfest site and you see hands in the air, smiling people dancing like no-one else is there, and you can hear a sound filled with such joy that it seems to elevate your spirit till it soars, then chances are you are listening to and watching another thrilling show by The Cat Empire.

Get high on sax and let The Black Sorrows take you there.

With more than 50 years of road behind them, The Black Sorrows and their Roots-soaked Blues Rock have a potent live chemistry that gets you going so you won’t want to stop. Songs such as So Young, Hit And Run, Shape I’m In, Hold On To Me, Harley and Rose, Chained To The Wheel, Never Let Me Go and the Chosen Ones have become live performance staples. As the leader of two of Australia’s most successful bands, Jo Jo Zep and The Falcons and The Black Sorrows, Joe Camilleri’s music has become part of Australian music culture. Joe was inducted into the Australian Recording Industry Association (ARIA) Hall of Fame in 2007 … continues to remain as relevant as ever …. touring throughout Australia, the UK and Europe, annually.

Swoon, sway those shoulders and sing along from the heart.

There is something incredibly special about The Teskey Brothers. It’s not just the music they make, or their preternatural ability to conjure the spirit of soul and blues masters, or even lead singer Josh Teskey’s era-defying voice that seems to belong more in the Mississippi Delta than rural Victoria. “If you don’t play it with soul, it’s not soul music, it’s just two chords and a beat,” says Sam.

The Teskey Brothers take influence from Otis Redding, JJ Cale and Marvin Gaye, mixing in elements of old Blues and British Invasion rock n roll, even some psychedelia, to create a unique sound that feels completely timeless, transcending eras to deliver something that could have been made now or 50 years ago. Onstage The Teskey Brothers are as tight as any in the game. Josh Teskey’s smoked whiskey vocals are captivating, while his brother Sam effortlessly throws down tasty blues licks over Brendon and Liam’s irresistible stripped-back groove. Audiences are awash with nostalgia and love for this new favourite with an old- school sound.

Grab a beer and get ready to groove with these Blues bangas!

Bluesfest magic alert!!! Acclaimed as one of Australia’s finest storytellers and live performers Ash Grunwald is set to rock the Bluesfest stage with his take on modern classic blues. New album MOJO features The Teskey Brothers, Kasey Chambers, Harry James Angus from The Cat Empire and Ian Collard from the Backsliders. So what’s the bet some of these, if not all, will jump on stage for a jam and deliver some music magic right up next to you. Soak it up!

Get down and get wise. John has perfected the art of performance and social messaging. He’s got the latest news on everything you need to be a conscious groover.

The Bluesfest family would not be where it is today without John Butler. Singer-songwriter, producer and activist, John Butler has brought a whole eco-awareness with him to Bluesfest with every one of his 13 previous visits. On this his 14th Bluesfest appearance John will be performing solo and will be featuring songs from his 2018 album, ‘Home’ as well as classic songs from his timeless repertoire. His songs convey the things we feel in our hearts but are afraid to say.

Songs about family life, love, what it means to be a modern man and personal insights into dealing with his anxious projections, John’s songs have always been his friends and he always maintains a special invitation for his Bluesfest fans to share the friendship every time he takes to the stage at the Tyagarah Tea Tree Farm.

Breathe in the air, set your intentions and dream with care.

His earliest live performances were a wonderful spectacle, placing Xavier inside a forest of yidakis (didgeridoos) from which he dexterously crafted layers of guitar, percussion, blues harp and vocals. He was distinct, unique and unforgettable. Since then he has played in a variety of solo and band formats, each with an unmistakable personality of its own. The further the ripples of his career reached, the bigger the wave got. Australia was the first to fall in love with Xavier. Then it was Europe. Then it was North America. The snowball keeps rolling. Xavier truly loves his fans and feels constantly blessed to be able to perform in countries all across our beautiful planet with a special place in his heart for Bluesfest where he performed first in 2004. He has inspired thousands of people and been the catalyst for others to find their own voice and is helping his own country to reconcile its past, and he is beloved as both an icon and a human being.

If ‘funner’ were a word we would use it as in ‘concerts don’t get more funner’ than these guys. If you are feeling like some downright pure fun plan these guys into your mood map.

Award-winning Melbourne Ska Orchestra is a force to be reckoned with when it comes to the stage. You will be blown away by up to 25 musicians performing at a time. Their joyous, energetic vibe is one that must be seen to be believed. Led by multi-instrumentalist and bandleader Nicky Bomba with so many band members on stage, they have the energy of a soccer team. With an imperative to make a solid unifying connection with the audience, each live show is a community event. Holding the live performance experience in high esteem, an ancient ritual where humans come together celebrating life through the wonder of music their set will leave you elated – and breathless. The band’s new single ‘Good Days Bad Days’ is just one of the tracks borne of an intense year of work. Bright, spunky and full of life, it’s everything audiences have come to love about the band. Nicky speaks on the video for the song: “ ‘Good Days Bad Days’ really kicks in with the crowd when we play it live. It’s a universal theme that everyone can relate to. I love how the film clip captures the raw energy of the live spectacle of the orchestra.

Feeling like a nightcap and some sweet sweet tunes to take you to that special space inside where you feel free.

Music seems to be a part of Kasey Chambers’ DNA, with 12 award-winning albums under her belt since the release of The Captain in 1999, Kasey’s brilliant songwriting and world-class performance have earned her a rightful position on the global country artist stage. Often described as a genre-defying singer and songwriter, she wears the honesty of country music on her sleeve and has become one of the most popular and acclaimed artists of her generation in Australia while winning a devoted cult following in the rest of the world. In 2018 Kasey’s exceptional career was honoured by being the youngest female ever to be inducted into the ARIA Hall of Fame. Kasey and her band will play all of her much-loved songs from ‘The Captain’ and ‘Barricades & Brickwalls’ all the way through her career to now, in a very special festival performance not to be missed.

If you feel like sitting back and taking a ride that veers across Blues and Country these guys have the road map to take you there in style.

Prepare yourself for an experience as Little Georgia’s latest release is a 6-minute psyched-out, grunge-tinged epic produced and engineered by award-winning American producer Nick DiDia (Pearl Jam, Neil Young, Powderfinger). After the release of the band’s debut studio album “All The While” in 2018 (also produced by Nick DiDia) they have spent the last year and a half touring between Australia and North America, growing their sound and their audiences including sets on the main stages of Byron Bay Bluesfest and appearances at AmericanaFest (Nashville) and Folk Alliance (New Orleans). 2021 is set to be another exciting year for Little Georgia, which will involve new releases as they step into a new sonic chapter.

Stretch out, slide back and rock your chair to these country blues!

Backsliders are Bluesfest regulars and have toured the Australian festival circuit for the past 35 years. Dom Turner (guitar and lead vocals), Rob Hirst (drums and vocals) along with Ian Collard (harmonica and vocals) are known for captivating live shows—an eclectic mix of Blues styles moving from original 21st Century blues with Australian themes, driving hill country and delta blues with jungle-like rhythms, to Piedmont blues-influenced all-acoustic unplugged treatments of 1920’s songs by heroes such as Mississippi Fred McDowell and Robert Johnson.