Bluesfest named finalist for ‘Music Festival of the Decade’ 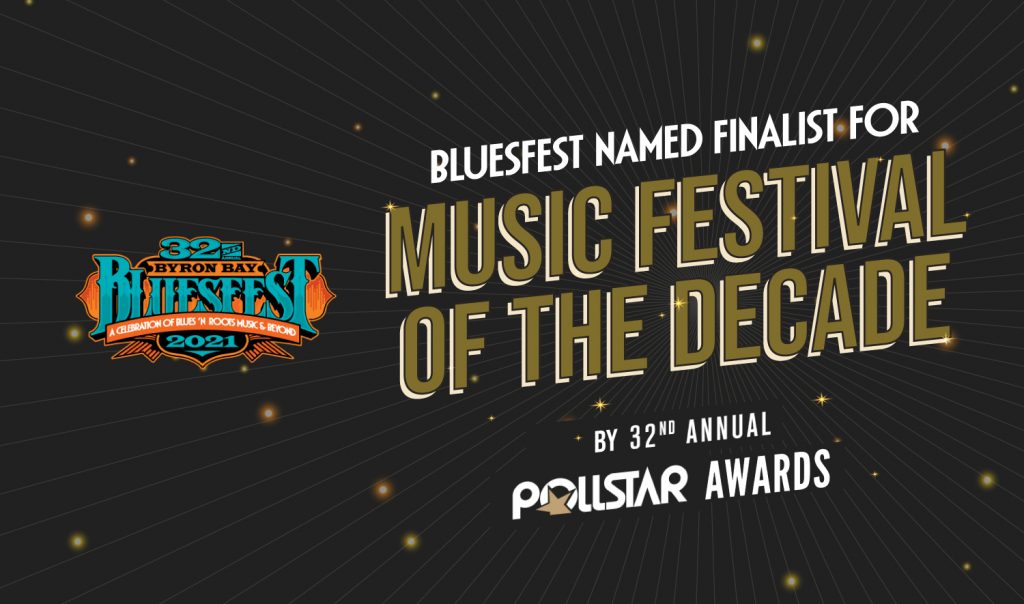 Bluesfest received news this morning of being named a finalist in the Pollstar Awards nominations for ‘MUSIC FESTIVAL OF THE DECADE’ – the only Australian festival, event or venue to be nominated for this award, celebrating

“To be nominated alongside Glastonbury Festival, Coachella, Outside Lands Music & Arts Festival, Bonnaroo Festival, Lollapalooza USA & Brazil, Austin City Limits and others, is simply up there with the greatest things that has ever happened in my 50 years in the industry.”

Bluesfest already proudly celebrates its title of ‘Australia’s most awarded festival’, having been nominated 9 out the last 10 years in the Pollstar Awards USA for ‘Best International Music Festival’ (the missing 10th nomination is for the year that Pollstar did not have the award), and a history of other nominated and awarded International prizes, including:

The news of this new nomination has firmed Bluesfest’s drive for the future of the festival.

“We have not rested since the cancellation of Bluesfest 2021. I am in constant daily communication with NSW State Government, and will have more to say regarding the rescheduled Bluesfest event and refunds for the recent cancellation very soon.

“We really look forward to being able to share more information with you at this time, and to see the continued support of our fans in coming back to Bluesfest after having been cancelled by Government Health Order for two years in a row.

“This support we have already seen greatly in your response on social media and in the media – we sincerely thank you.”

This week, it was announced that ‘Mad Max Furiosa’ – the next blockbuster starring Chris Hemsworth is set to be “the biggest film made in NSW”. It is reported that the film will create 850 local jobs and inject $350 million into the NSW economy.

Bluesfest has once again demonstrated that Live Music really does bat well against blockbuster movies… “and we bring in that result EVERY year when we can be allowed to put on the festival” Bluesfest Director, Peter Noble said.

“It is an honour to know that Bluesfest continues to be seen at the top of the music industry by the bible of the Live Music industry worldwide – Pollstar USA, as Australia’s greatest festival, and in the top ten of the worlds’ leading festivals.”

Bluesfest shares this nomination with other world-leading festivals