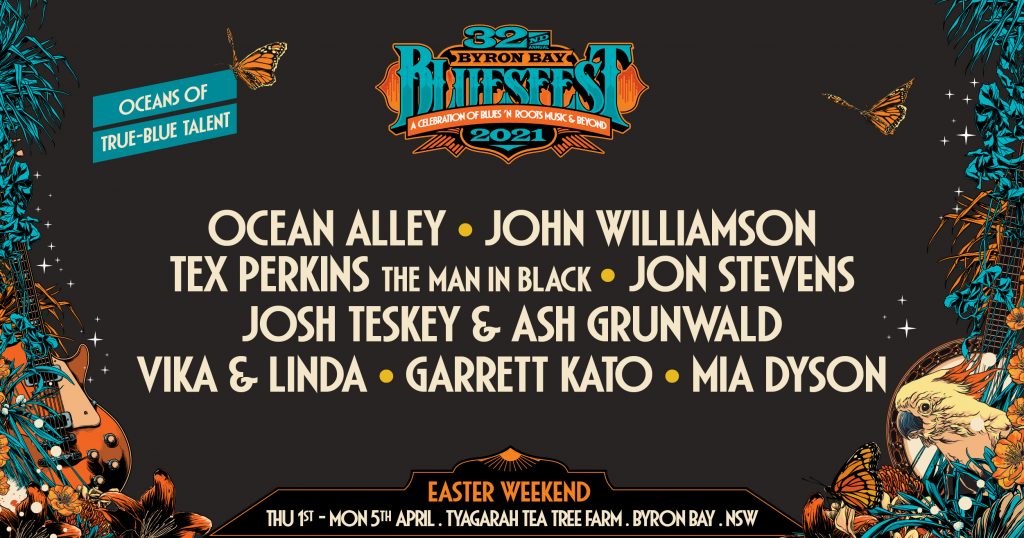 You may remember a few weeks ago we said… “Now that’s a True-Blue dream of an Aussie lineup!”… and now we’ve made that dream come even more true with 8 new Aussie Artists joining the already formidable lineup for Easter Long Weekend next year.

Our lineup is deliberately diverse and eclectic and features artists across all genres for everyone to enjoy!

“Time will tell but it is being said that the Bluesfest 2021 line up is the greatest assembly of Australian artists to ever perform at one event. Ticket sales are showing that the Australian public is ready to celebrate safely and we are on target for a sell-out at our expected capacity. My focus right now is on bringing this festival home in 2021.“

Northern Beaches of Sydney natives Ocean Alley released their critically acclaimed third LP ‘Lonely Diamond’ in June, debuting at #3 on the ARIA Album Chart and garnering four-star reviews from NME and Rolling Stone Australia who praised “a rich, expansive universe brimming with a kind of electricity that’ll make for huge on-stage moments” and “they’ve managed to set a new standard for what their music can be” respectively. It follows the success of their second full-length ‘Chiaroscuro’ in 2018 which propelled the band into national prominence and saw them sell 25,000 tickets over 15 sold out shows that year in Australia along – culminating with their ARIA nominated, double platinum-selling single ‘Confidence’ taking out #1 in triple j’s Hottest 100 of 2018. Their breakthrough year was backed-up with 30 sold out shows around the world in 2019, plus major festival appearances at ‘Reading & Leeds Festival’ [UK], ‘Splendour in the Grass’, ‘Sziget’ [HU], ‘BottleRock’ [US] and more, with the band amassing more than 315 million cumulative streams to date.

In 2021 Australian music icon John Williamson will celebrate his 51st anniversary in the entertainment industry and embark on “The Winding Back” tour which will foresee him closing the book on his regular touring. When John Williamson wandered into Richmond’s GTV9 studios in 1970 with a guitar under his arm, little did the Mallee farmer realise he’d make a 50+-year career out of singing and performing.

His performance of ‘Old Man Emu’ – the first song John had ever written – on Channel Nine’s popular New Faces program resulted in a number one single and a record deal. It also marked the appearance of a striking new talent: an unofficial custodian of Australian stories. Half a century on, John Williamson has made an art of expertly capturing Australia in song.

Painting lyrical pictures of our unique fauna and flora, landscapes and people, John has encapsulated the beauty, wonder and, sometimes, heartbreak of life Down Under. From boabs to billabongs and snowy mountains to sandy beaches, the Mallee-born songwriter’s 52 albums–including 20 original studio albums–have traversed Australia like a dust-covered road train, deftly moving between larrikin humour and touching pathos and have placed him in the Top Five best-selling Australian artists joining Slim Dusty who sits at No. 1.

“The Winding Back” tour takes in more than 40 dates across Australia through to the end of 2021. With his honours including the ARIA Hall of Fame, an Order of Australia, 28 Golden Guitar Awards, Australian Roll of Renown induction, not to mention over 5 million albums sold and thousands of shows performed, it’s hard to begrudge the 75-year-old a less hectic schedule. First though, there’s a 51st anniversary to celebrate and what better place than Bluesfest to experience it with Mr True Blue himself.

Tex Perkins The Man In Black

There are few artists within Australia who can translate the work of ‘The Man in Black’ and bring it to modern day like Tex Perkins. His reverence for Johnny Cash’s career is evident in the way he approaches every song. Johnny Cash made an indelible impact on the international music scene. He passed away in 2003 but is still considered one of the most influential musicians of all time, as his sales of over 50 million records will attest. Tex Perkins needs no introduction to Australian audiences; he is a legend within the Aussie music industry and is revered as one of the country’s rock n’ roll outlaws. It is said his affinity with Johnny Cash started in his earliest band and is an enthusiasm he hasn’t relinquished. After fronting The Cruel Sea, Beasts of Bourbon and touring with Tex, Don and Charlie and The Dark Horses, Tex Perkins has had an incredible and varied music career.

Now Perkins returns to his love of singing the songs of Johnny Cash with a special Bluesfest-only performance. Tex Perkins – The Man In Black at Bluesfest will be more intensely music driven, less talking and more of the music of Johnny Cash.  ‘The Man In Black’ has been lauded by critics and fans alike and won Tex and his crew a Helpmann Award for Best Contemporary Australian Concert.

In 2018 a co-founding member of INXS, Andrew Farriss, surprised Jon Stevens by entering the band room after not seeing each other in 15 years to tell Jon he should add more INXS songs to the set list. Jon was on The Best of Jon Stevens Tour reflecting on his 40-year career, performing songs from Noiseworks, Jesus Christ Superstar, The Dead Daisies and his solo collection with just a couple of INXS classics. This reunion with his old friend with whom he’d shared the stage with around the world fronting INXS from 2000-2005 formed the idea for his new tour – ‘Jon Stevens | The Noiseworks and INXS Collection’ Tour.

After a sell-out tour in 2019 the former lead singer of Noiseworks and INXS is back tributing the legendary bands that catapulted him into Aussie Rock Royalty! Jon Stevens l The Noiseworks & INXS Collection Tour brings hits “Take Me Back”, “New Sensation”, “Don’t Change”, “Hot Chilli Woman”, “Never Tear Us Apart, “No Lies” and more. This show is an assault of the senses, with nothing but relentless hits.  Miss it and you’re MAD!

Two local powerhouses Josh Teskey [lead singer The Teskey Bros] and Ash Grunwald have teamed up for ‘Push The Blues Away’ (out Friday 13 November) – an album born out of a mutual love for the blues and a genuine appreciation for each other’s talents. This special show will no doubt bring the best out of both artists and is a definite for the “My Planner” section of your Bluesfest App. On ‘Push The Blues Away’, Josh and Ash cast off the weight of expectation and revel in music’s most simple pleasures. Recorded entirely live and straight to tape, with their only percussion consisting of gospel-inspired hand claps and stomps, the pair laid down seven original tunes, some penned by Josh, some by Ash, along with two classic Blues covers, Son House’s ‘Preachin’ Blues’ and the song that kickstarted the whole project, ‘The Sky Is Crying.’ To help them achieve this vision, they enlisted the help of Josh’s brother, Teskey Brothers’ guitarist, vocalist and Grammy-nominated engineer, Sam Teskey on production duty.

Both artists have had an extremely busy 12 months; renowned as one of Australia’s finest live performers, Ash Grunwald released his critically acclaimed new album ‘MOJO’ along with his first book, “Surf By Day, Jam By Night” whilst The Teskey Brothers followed up their ARIA Award-winning and Grammy-nominated second album ‘Run Home Slow’ with the 2020 release of ‘Live At Forum’, earning them their first ARIA chart #1.

They’re Australia’s most revered singing sisters, known for their rich vocal harmonies and stylistic breadth. After three classic albums with The Black Sorrows, Vika & Linda have released six studio albums, two live albums and a chart-topping anthology. They have also sung on number one albums by Paul Kelly, Kasey Chambers and John Farnham, done gigs for the Dalai Lama, Nelson Mandela and the King of Tonga, and been nominated for four ARIA Awards. Recently, whilst still celebrating the recent release of their first ever best-of collection (and first ARIA #1) ‘Akilotoa (Anthology 1996-2004)’, Vika & Linda have wasted no time in following up with an inspired album of gospel songs titled ‘Sunday’ (The Gospel According To Iso),’ out now (ARIA #2). The album was borne out of their Sunday Sing Song livestreams on social media during lockdown, and pays tribute to gospel pioneers including Sister Rosetta Tharpe and Mahalia Jackson. These are songs about survival, compassion and redemption.

Originally from Canada, Byron Bay local singer-songwriter & producer Garrett Kato went from busking and living out of a backpack to tallying over 45 million worldwide streams and performing sold-out shows alongside Damien Rice and Ziggy Alberts. He landed a sync in Hollywood blockbuster ‘Bad Moms’ and his single ‘Take It Slowly’ has surpassed 13 million Spotify streams. His 2019 EP, ‘Distant Land’, earned the endorsement of triple j and Beatroute Magazine as the title track eclipsed 2.7 million Spotify streams. At the same time, he cemented himself as an in-demand, platinum-award winning producer. He worked with Ziggy Alberts on his 2016 EP ‘Four Feet in the Forest’ (certified Platinum) and his 2018 album ‘Laps Around the Sun’ (certified Platinum) and has also worked with Pete Murray, Kyle Lionheart, Riley Pearce, Pierce Brothers, Jack Botts and more.

Mia Dyson is an award-winning guitarist and singer/songwriter who has toured the country with the likes of Eric Clapton, Bonnie Raitt, Chris Isaak and many more. A multiple ARIA & APRA award-winning artist, Dyson has been named one of Australia’s top 25 guitarists of all time. Growing up in the Australian bush and in the sleepy beach town of Torquay, Mia Dyson was raised listening to American music as her dad was a big Blues fan and her mother a big Bob Dylan fan. It was at an early age Mia became fascinated by the mythology of American rock & roll. Since moving to Los Angeles in 2010, Dyson’s triumphs have included opening for Stevie Nicks at the Santa Barbara Bowl, in addition to self-releasing ‘Idyllwild’, ‘The Moment’ and ‘If I Only Said So Far I Take It Back’ to critical acclaim.