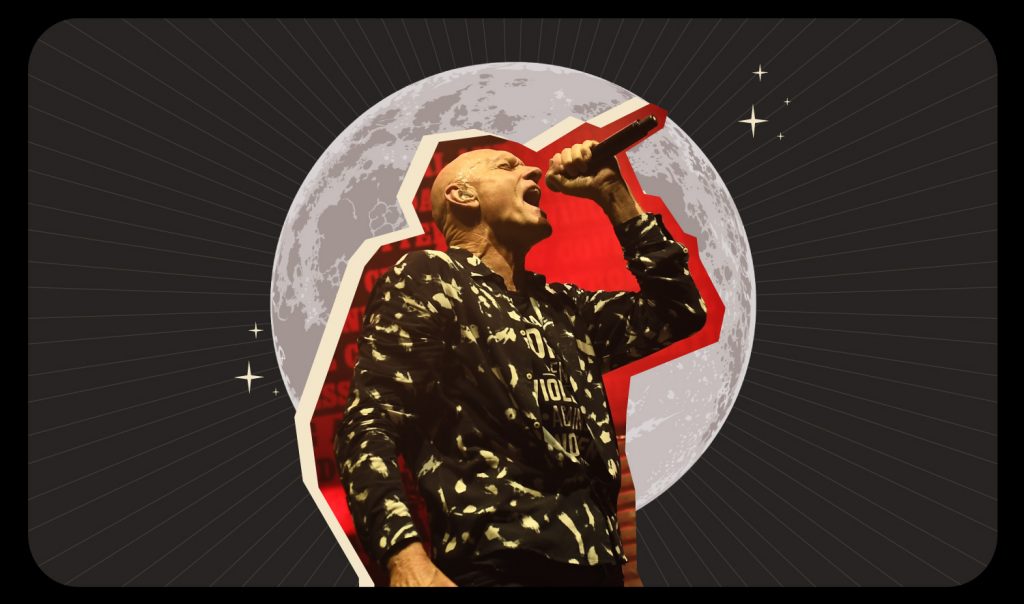 Be there for their next milestone on Friday night at Bluesfest 2022!

A TALE OF TWO PETERS

When Midnight Oil takes to the Bluesfest stage on Friday, 15th April 2022, it will be a seminal moment for Bluesfest Festival Director Peter Noble – a moment he has been waiting 20 years to see. Back in 2001, when Midnight Oil last headlined Bluesfest they were heading for an extended hiatus with Peter Garrett entering politics. During this hiatus time, and after talking with Peter Garret at the Helpmann Awards, Peter Noble was always hopeful that when The Oils got back together and tour again, they would return to headline Bluesfest.

Between then and now, Bluesfest regulars will have noticed on occasions, year on year, the line on the Bluesfest poster ‘Alas no Midnight Oil this year’ – a wry comment on the years Midnight Oil was absent from the touring industry.

When, in 2017, Midnight Oil undertook the Great Circle World Tour, the Australian leg of the tour schedule did not align with Bluesfest. Neither did the tour of the Makarrata Project earlier this year – the long-awaited return to Bluesfest seemed ill-fated.

But then… fate stepped in. When the Oils heard about our Easter festival cancellation and that an October reschedule was proposed, Midnight Oil’s management contacted Peter Noble to help the return and rise of Bluesfest after this hefty setback, not only to support the festival but for the industry and its ancillary suppliers to get back on their feet. The deal was done, and Midnight Oil was soon after announced our opening night headliner – ending Peter Noble’s 20-year wait.

With less than 100 days until Bluesfest, we are all buzzing.

Bluesfest is returning – with Australia’s most iconic band launching their first album in 20 years and packing their set with classic songs. It’s going to be memorable, and you bet Peter Noble will be side-of-stage (or front and centre!) to watch this performance 20 years in the making.

The story begins in 1977 on Sydney’s Northern Beaches when the surf-rock band ‘The Farm’ change their name to ‘Midnight Oil’. With their increasingly socially conscious lyrics and incendiary cultural messages housed in a blitzkrieg of drums and guitars, they quickly establish themselves on the local touring circuit.

But, at the time, there were few friends for Midnight Oil in radio – radio stations were reluctant to play new Australian music… except for one station – a new young ABC startup station making a name for themselves “Double Jay – the head of the dial”.

With little funding and with an outside broadcast truck saved from the ABC scrapheap, Double Jay set out to record and broadcast the live music scene in Sydney… and Midnight Oil became regulars on the airwaves. Double Jay and the Oils found common ground in their social messaging, both railing against injustice and making a stand for equality and fairness, with Midnight Oil themselves headlining the many Double Jay free concerts held across Sydney.

Etched in the 1982 memory bank of many Sydneysiders is the famed ‘A Day at the Beach 2JJJ Youth Benefit’ at Wanda Beach in aid of the local youth refuge. A huge storm blew in as The Oils took the stage. The rain didn’t stop, and neither did they – and as you will see, neither did the crowd.

In 1985, Midnight Oil repaid the radio station in full when they performed an unforgettable live set on Sydney’s Me-mel (Goat Island) to celebrate the 10th birthday of music station 2JJJ to an intimate gathering of 100 prize-winners, staff and guests.

There was the definitive moment in 1986 when Midnight Oil was invited to tour through some of Australia’s most remote communities with the legendary Indigenous group, The Warumpi Band. The ‘Blackfella/Whitefella’ tour was a transformative experience that exposed the band to the austere beauty of the desert landscape, the inspiring creativity of the indigenous people, and the deplorable conditions in which so many of those people existed.

Midnight Oil returned to Sydney and began work on their global breakthrough album, “Diesel and Dust”. The singles lifted from that album like “The Dead Heart”, “Put Down That Weapon”, “Dreamworld” and, of course, “Beds Are Burning” brought Midnight Oil to new audiences around the globe. It ultimately sold more than 6 million copies and earned them a Grammy nomination although the band declined to attend the ceremony in order to honour their commitment to a political event at home.

In 1994, having steadfastly refused to play in South Africa whilst in the grip of apartheid, Midnight Oil was part of the celebration of the inauguration of Nelson Mandela in front of a packed Ellis Park Stadium, Johannesburg.

Among numerous other honours, “Beds Are Burning” is included in the U.S. Rock ’n’ Roll Hall of Fame as one of the “500 Songs That Shaped Rock ’n’ Roll”

In the year 2000, Midnight Oil made their mark again – this time to over one billion people at the closing ceremony of the Sydney Olympics, revealing clothing emblazoned with the word “SORRY”. This provoked a global discussion about the apology due to the stolen generations. Footage of this performance is rarely seen and currently only found here at time stamp 1:51:25:

Then, in 2002 Midnight Oil went on hiatus. Peter Garrett pursued a political career: the other members continued making music together in The Break, and separately in other bands for over a decade.

Midnight Oil re-grouped in 2005 to headline the “Waveaid” tsunami benefit concert for over 50,000 people at the Sydney Cricket Ground and again in 2009 when the band topped a massive bill at “Sound Relief” at the Melbourne Cricket Ground where over 80,000 fans joined them in raising millions of dollars for victims of Australian fires and floods.

Finally, in 2017 The Oils were back with the mammoth ‘Great Circle World Tour’ – circumnavigating the globe, playing 77 gigs in 16 countries, to over half a million fans over 7 months. They finished with a tour of Australia climaxing with two shows at Sydney’s Domain – thankfully captured for an album and DVD release.

“As we sing the songs night after night, there are lines that pop out which were written 35-40 years ago, which perhaps have more relevance now than they did when they were written.” Rob Hirst, 2017

“We’ve still got some work to do. We need constitutional recognition, and we need some form of agreement which is acceptable to the aboriginal people of our country.” Peter Garrett, 2017

Late-2020 saw the band release their first new body of work in nearly 20 years with the mini-album ‘The Makarrata Project’. All songs on the record share a strong focus on Indigenous reconciliation, and each features collaborations with First Nations artists, elevating public awareness of ulurustatement.org/the-statement.

“There are things we think are so important they have to be said, and we wanted to say it and the best way we could say it was with song.” Peter Garrett, 1990.

Midnight Oil makes no excuses. No compromise. They do it their way. They always have – and they always will.

Militance with music, land rights, human rights, social injustice, corrupt governments, political statements – no one is exempt. The Oils stand proudly in the front line for all they believe in. They even took a sonic battering ram to New York City in 1990 to protest outside the offices of the Exxon Oil company – whose tanker, the Exxon Valdez,  had run aground and caused one of the largest oil spills in history.

So now Midnight Oil is poised on another milestone moment – their FINAL CONCERT TOUR!

Tickets are getting scarce. Head to our ticketing page to secure yours now.