Album of the Week ‘Medicine Songs’ by Buffy Sainte-Marie 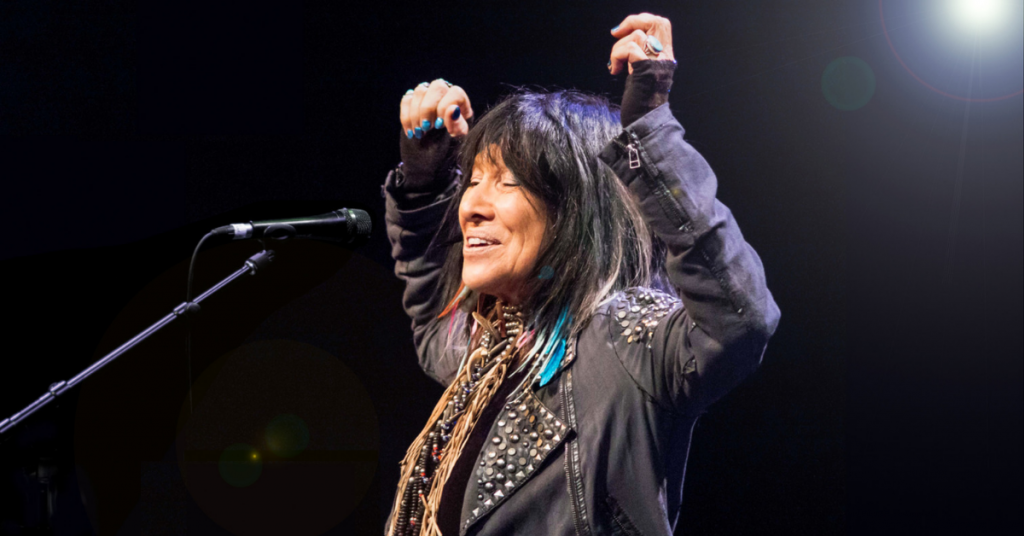 The Soundtrack for the Resistance

“This is a collection of front line songs about unity and resistance – some brand new and some classics – and I want to put them to work. These are songs I’ve been writing for over fifty years, and what troubles people today are still the same damn issues from 30-40-50 years ago: war, oppression, inequity, violence, rankism of all kinds, the pecking order, bullying, racketeering and systemic greed. Some of these songs come from the other side of that: positivity, common sense, romance, equity and enthusiasm for life.

I’ve found that a song can be more effective than a 400-page textbook. It’s immediate and replicable, portable and efficient, easy to understand – and sometimes you can dance to it. Effective songs are shared, person-to-person, by artists and friends, as opposed to news stories that are marketed by the fellas who may own the town, the media, the company store and the mine. I hope you use these songs, share them, and that they inspire change and your own voice.

It might seem strange that along with the new ones, I re-recorded and updated some of these songs from the past using current technologies and new instrumentations – giving a new life to them from today’s perspective. The thing is, some of these songs were too controversial for radio play when they first came out, so nobody ever heard them, and now is my chance to offer them to new generations of like-minded people dealing with these same concerns. It’s like the play is the same but the actors are new.

I really want this collection of songs to be like medicine, to be of some help or encouragement, to maybe do some good. Songs can motivate you and advance your own ideas, encourage and support collaborations and be part of making change globally and at home. They do that for me and I hope this album can be positive and provide thoughts and remedies that rock your world and inspire new ideas of your own.” – Buffy Sainte-Marie

The nineteen songs in this collection are about the environment, alternative conflict resolution, Indigenous realities, greed, and racketeering. It features a brand new politically charged rocker, “The War Racket,” that slinks and pounds as Sainte-Marie sing-speaks wisdom like, “You pretend it’s religion, like there’s no one to blame/ for the dead and impoverished in your little patriot game.”

There are new recordings of some of the most insightful songs Buffy’s ever written, like the decades-spanning, Rock ’n’ Roll reportage “Bury My Heart at Wounded Knee,” or the first powwow Rock song, “Starwalker,” an anthemic celebration of Indigenous leadership. There are timeless protest classics like “Universal Soldier,” “Now That the Buffalo’s Gone,” and “Little Wheel Spin and Spin,” as well as forgotten gems that were simply ahead of their time when first released, like the shimmery, eye-opening “Priests of the Golden Bull,” and the chillingly prescient “Disinformation.” But this isn’t an album of just protest songs.

“Protest songs are good, they’re important, and they talk about a problem,” Sainte-Marie says. “But there are other activist songs which don’t have a label, but they can enlighten and liberate, inform, motivate or otherwise encourage solutions.” “Carry It On” is like that. So is “You Got to Run,” another new rocker and collaboration with acclaimed experimental vocalist Tanya Tagaq. “You Got To Run” might be championing a marathon runner or an election candidate, charging through self-doubt to the real victory beyond the win.

Sainte-Marie doesn’t sugarcoat the truth, nor does she shy away from hard realities, but ‘Medicine Songs’ is never overwhelming or oppressive. Rather than making us feel smaller, sadder or more cynical, Buffy Sainte-Marie makes us feel stronger and more capable of seeing the world around us clearly. Part rhythmic healing, part trumpeting wakeup call, ‘Medicine Songs’ is the soundtrack for the resistance.