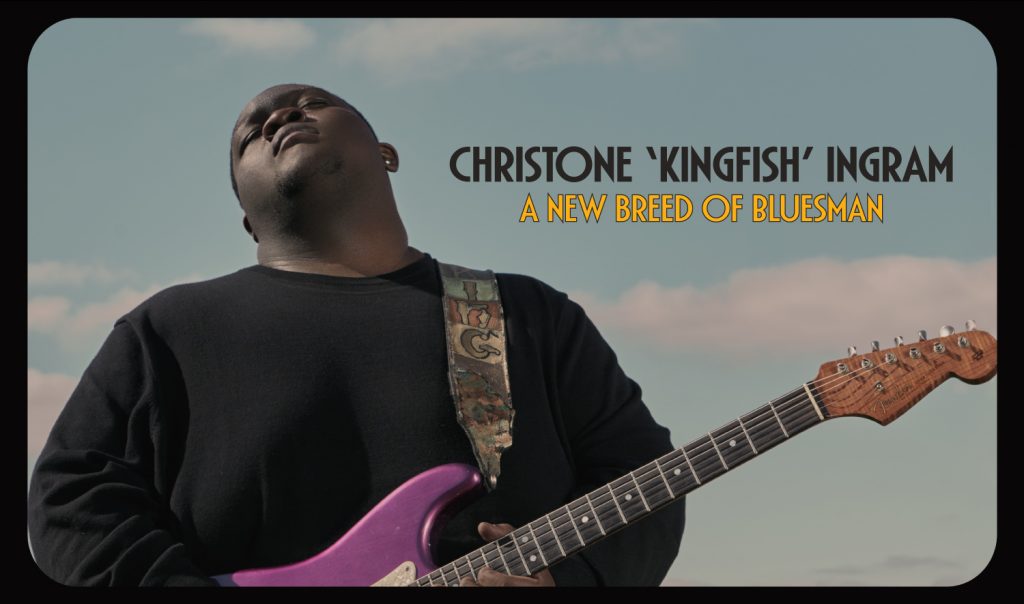 Buddy Guy called him, “the next explosion of blues.”

Rolling Stone said, “one of the most exciting young guitarists in years, with a sound that encompasses B.B. King, Jimi Hendrix and Prince.”

Although his inspiration ranges from Jimi Hendrix’s ‘Little Wing’ and ‘Voodoo Child’, through to Prince’s ‘Sign Of The Times’ (“pretty much my favourite album” says Christone) and ‘Purple Rain’ albums, right back to 1971’s Funkadelic classic “Hit It and Quit It”… make no mistake this young man brings an astonishing new take on the Blues. Christone ‘Kingfish’ Ingram is the new breed of Bluesman.

He has clocked up some amazing stats with his debut album, ‘Kingfish’ (2019), including a Grammy nomination, 5 Blues Music Awards, and 4 Living Blues Awards – taking out ‘Album of the Year’ in both, and achieving the ‘#1 Best Blues Album Of 2019’ by UK music magazine MOJO.

Oh, and it also debuted on the Billboard Blues Chart in the #1 position and remained on the chart for an astonishing 91 weeks.

We caught up with Christone recently…

He was (literally) on the road, driving in a Sprinter van on his way to Connecticut for a couple of shows. Nevertheless, we had a great chat!

We started by asking him about his musical upbringing…

CHRISTONE: “I grew up immersed in the Blues of the Mississippi – I was exposed to the Blues through my family. I was into Gospel music simply off my momma’s family, hanging around them, and seeing them sing and perform in church. So that was even before I got into music in any form seriously… You know, just being in the area and just being around the rich side and rich history of the Blues in my hometown.”

You were really into music and performing at a young age – so, when did you realize that you had something that was a little extra special? What we now know was already leveraging you above those around you…?

CHRISTONE: “Oh, I want to say when I did my first singing and performing for one of my teachers… Then I was looking at a well-rounded reception from my first two gigs. People just started to react and that’s where I kind of came to the conclusion – this was for me.”

Your debut album, ‘Kingfish’ got you a Grammy nomination, five Blues Music Awards, four Living Blues Awards, including Album of the Year in both, debuted on the Blues chart at number one – and stayed there for 91 weeks. Tell us, is that what you were expecting?!

CHRISTONE: “Honestly no, not at all. Honestly, I didn’t think the record would do that good, or do that well. So it was all a shock to me as well. Yeah for sure.”

At the tender age of 22 (maybe just coming on the cusp of 23) you’ve got a new album out, ‘662’ – which refers to your home dial code in the USA. Was the process of writing and recording your second album different from your first? Did you have a weight of expectation on your shoulders?

CHRISTONE: “Well, definitely there’s always going to be an expectation when you make another project because you want it to be better than the first one… there’s always going to be that pressure or the expectation as well. I had much more time at home, being off the road, you know when COVID first hit. I felt like it was time for another record. So I got with Tommy Hambridge and Richie Flemming – we worked from May up until September. We just did Zoom sessions on the computer –  just pretty much writing songs. And I was telling him what I wanted. And yeah man we got it done. And in September we took a week and recorded in Nashville.”

Do you have a favourite song on the album? A “I’m playing this at every gig” kind of song?

CHRISTONE: “I pretty much dig all of them. I love all of them but some of the ones I really love to play is “Another Life Goes By”, “Long Distance Woman”, “You’re Already Gone”, man… those are definitely some of my highlighted ones on the record for sure.”

Talking about your live performance… let’s give a shout out to your band. Who are you bringing with you to Australia?

CHRISTONE: “Well I have my bass player – Paul Rogers from Tupelo, Mississippi. My drummer – Chris Black who’s from Shelby, Mississippi. And my keyboard player – Eric Robert who’s from Nashville. So that is my touring band right there.”

One last question. You’ve shared the stage with just about everybody – is there someone you are still hanging out to collaborate with?

CHRISTONE: “Oh yeah most definitely. There’s definitely a bunch of people in the RnB and Rap scene that I’m really into. I want to do something with Snoop Dogg, and different RnB artists like H.E.R. … So yeah – there are definitely some artists out there that I eventually want to do stuff with. And then other Blues artists as well. I’m always out fishing for new people to work with.”

Perhaps someone on the Bluesfest stage…?!

He’ll be playing Opening Night, Thursday 14th April on the JUKE JOINT Stage, Saturday 16th April on CROSSROADS, Sunday 17th April on JAMBALAYA, and Monday 18th April back at JUKE JOINT. Make sure you catch this dynamic, explosive new star – you will not be disappointed.