A Chat with John Mayall 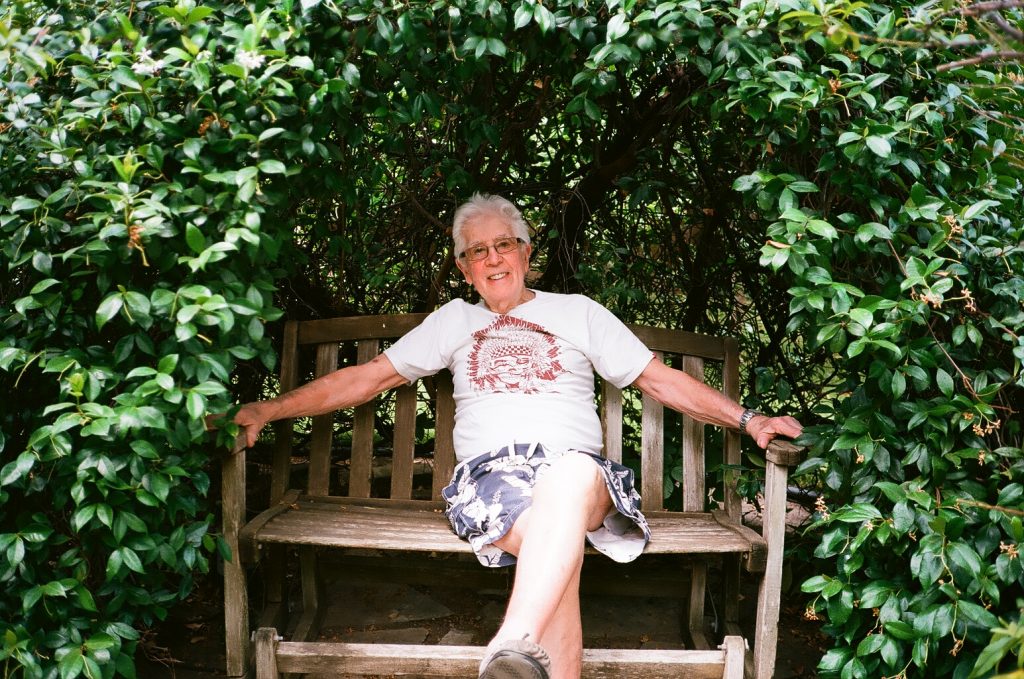 Photo and Interview by Samson Mayall

November 29, 1994 marked the 61st birthday of the legendary John Mayall – a man whose illustrious and well-decorated career had spanned over 3 decades and amounted to 39 albums by that point.  This date also marked the day that I was born; the sixth and final Mayall offspring to enter onto the scene.  Growing up, I always fantasized about what the excitement of those early Bluesbreakers days must’ve felt like not to mention what the artistic explosion of 1960’s Britain must’ve looked like.  John, originally from a small village outside of Manchester, formed the Bluesbreakers in 1965, which became a revolving door of young talent coming in and subsequently churning out as polished and developed veterans to be.  A few names come to my mind especially within those first 5 or so years: Eric Clapton and Jack Bruce (Cream, and you know, just Clapton in general), Peter Green, John McVie, and Mick Fleetwood (Fleetwood Mac), Andy Fraser (Free), and Mick Taylor (The Rolling Stones).  Although these may be days gone by at this point, it is Blues and Rock & Roll lore that was the foundation of a career I’ve still had the pleasure of witnessing over 50 years later.

The Grammy-nominated artist that I get to call my father has now tallied up 66 albums and has recently been inducted into the Blues Hall of Fame; don’t think I’ve missed out.  He’s known in the industry as a true road dog, still carrying his own bags and gear into each sound-check (if he even bothers with a sound-check at this point) and taking as little days off as possible at 85 years old.  Bluesfest 2020 will mark his 4th time playing the festival and also mark a 35+ year relationship with festival director, Peter Noble, who once was his tour manager back in the 80’s but then went on to book him as a headliner for Bluesfest 1991.  It is safe to say he is bigger than just family of mine as Byron Bay has happily taken him in as one of its own over the last 30 years.  I got the chance to catch up with Bluesfest favorite, John Mayall, ahead of his return to the Northern Rivers in April below:

LOOKING BACK TO YOUR FIRST ALBUM IN 1965, DID YOU EVER THINK THAT THIS IS WHERE YOU’D BE NOW AT 85?

I think that would’ve been a real pipe dream. I think everybody at that time was more concerned with the present with the gigs that we were getting in the UK. Later on, we branched out and we went to Europe, and you know, put the Blues in people’s heads in those countries that we were going to. So, life is very very strange because you don’t think that far ahead, you just deal with the present time and it usually is an all consuming thing. It’s very time consuming and a very enjoyable ride really. I mean we enjoy playing for the people and traveling to different parts of the world.

WHAT IS IT EXACTLY THAT KEEPS YOU INSPIRED, KEEPS YOU PUTTING OUT ALBUMS, AND KEEPS YOU HEADING BACK ON THE ROAD?

Well the band that I have really applies to any period of my career where I’ve been the band leader and chosen the musicians I wanted to interact with. So that’s always been the case. Fortunately, there are a lot of these line ups over the years that have stood the test of time and there’s been plenty to do. So when I go on the road it’s like a really good adventure, playing what we are currently doing to a new audience and there are lots of people who have seen me many times before and I always think of them, they don’t want to hear the same stuff every night. I keep the set list moving along and that’s why we have a great time playing. So it’s an adventure.

WHAT DID IT FEEL LIKE EXPLORING THESE UNCHARTED TERRITORIES OF UK BLUES ROCK BACK IN THE DAY?

Well it was mainly in England that we did all our work before we branched out into Europe. We did so many gigs, we were working every night I don’t think that we had more than a handful of days off in the whole year. So there was plenty going on and there was a lot of traveling involved and that was really the main thing that you were dealing with. You’ve got this clapped out van and you just piled into that and did the best you could, hoping it wouldn’t break down on the road. It was a full time job really and it was something we really enjoyed doing, reaching the audience we were going to at the end of the road. I don’t regret any of it. It was all a big adventure.

WAS IT A CONSCIOUS THING THAT YOU HAD THIS NEW EXCITING SOUND YOU HAD STUMBLED UPON AND WERE PROGRESSING IN THE MUSIC WORLD?

It was very much so when we were all on the same circuit. I remember so many times that we would meet each other up on the M1 when we were stopping by at the Blue Boar for a snack or something. There were so many bands that were doing the same circuit up and down the country, so it was very exciting times to run into people of the same itineraries you did. It was all music and that’s all people talked about. We would just hope the van wouldn’t break down.

YOU EVENTUALLY PICKED UP AND LEFT THE UK AND FAMOUSLY HEADED ON OVER TO LAUREL CANYON, CALIFORNIA. WHAT WAS IT THAT ATTRACTED YOU TO STAY THERE AND THEN SUBSEQUENTLY PUT OUT THE ALBUM “LAUREL CANYON BLUES”?

That was the thing about it – that first gig that we did in the US was in New York. It was in the winter time, so it was January or February I forget which it was, but it was freezing cold and just really miserable. We were there for the first time, very excited to play the music that we were playing. We moved from there to one night in Detroit and then when we moved to California and it was like the world opened up because the weather in January or February was sunshine. It was just brilliant. From that moment on, I knew that’s where I wanted to live. So I lost no time really moving. I think within 6 months I’d bought a house there. House properties weren’t what they are today and the price was ridiculous. I think it was $36,000 for the Laurel Canyon house. You can’t do much really with that these days. It was very fast moving and…  music was really expanding during the early 60s so I was glad I was very much a part of it.

I’M SURE LIVING THERE HELPED YOUR OWN MUSIC PROGRESS MOVING FORWARD.

The thing about the house in Laurel Canyon was only like ten minutes away from the heart of Hollywood. You could look down the hill and you could see Sunset Boulevard and all the action that was going on there. You have all the benefits and the feeling of peace and quiet of the country and yet you’re that near to where all the action was. It was quite a unique place to have ended up. I was obviously very happy there.

YOU LATER POP UP AT THE SECOND ANNUAL BLUESFEST. WAS THERE A RELATIONSHIP THERE WITH PETER NOBLE BEFORE THAT FESTIVAL?

I think the earliest relations that I had with Australia touring was involved with Peter Noble. He was, at that particular time, our tour manager so he did all the driving and running around and organizing of things. It’s amazing to me that he’s done so well in the business and has done so much for the musicians and the work that they do. Peter and I do go back a long, long way right to the beginning. We always had a good time playing together on the road with all the adventures that we’d get up to. Life was good. It’s just amazing to me that he’s done so well after it all.

WHAT’S IT LIKE BEEN WORKING AND TOURING WITH CAROLYN WONDERLAND?

She has the upmost respect for the music and she just loves to play the guitar. We get on really well, it’s a magic combination really. She’s humble in some ways and yet very straight forward and exciting when she picks up that guitar and starts singing. It’s her character that I think really appeals to audiences and I think that you’re really going to love her when everyone over there stops to hear what’s going on. It’s a great addition to the band so we’re all very happy with the way it’s been going and will continue to go.

SPEAKING ON COMBINATIONS, WHO ELSE CAN WE EXPECT TO SEE IN YOUR BAND AT BLUESFEST 2020?

Our group has been together now for over ten years it seems like. Jay Davenport is the drummer. Greg Rzab is the bass player. I’ve worked with those guys for quite some time now, but I’ve known Greg Rzab from way back when he was working regularly with Buddy Guy… [and] Greg was the one that suggested that somebody he worked with was really good with Jay. They came as a package really from Chicago. The kind of music we play, of course, is right in their back pocket. It’s proved to have all the right elements.

CAN WE EXPECT A 67TH ALBUM BEFORE YOU MAKE IT OUT HERE?

Well Eric Corne has been our producer and engineer for quite some time now and he’s got a plan that when we finish our touring… in the winter months, he’s got a few days here and there that we can record another album. So it’s a perfect time really. We’ve got plenty of new material that we can turn to. I haven’t got the details of that yet, but I can definitely assure the world that there’s always new material inspired by the blues. You’ll be getting a good rocking album with whatever thing we come up with.

I’m looking forward to it. We always have a good time.

Catch John Mayall this April on his 10 date tour, including Easter Sunday and Monday Bluesfest 2020.