Catching up with our Bluesfest Busking Winner 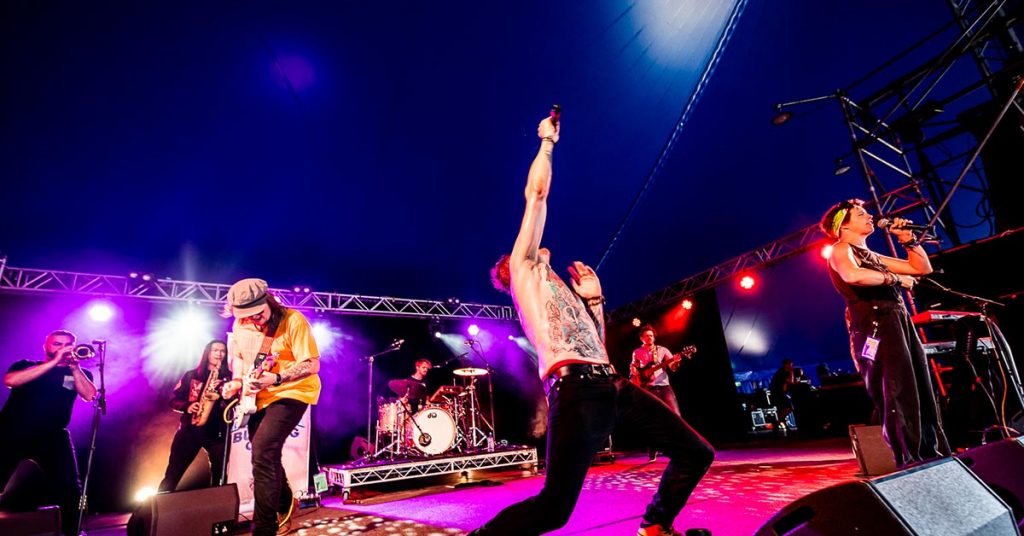 The year was 2002. A young Jake Dickinson stood in the crowd at Red Devil Park, bewitched by the likes of Buddy Guy, John Butler, Ozomatli, Guy Davis, and many more. In that instant, the then 13-year-old decided he’d one day be up on that stage playing to the Bluesfest masses. Fast forward 17 years and Dickinson, now guitarist and general manager for Electrik Lemonade, has made that dream a reality with his nine-piece band of funklords.

Since Electrik Lemonade’s inception in 2010, they have taken Australia by storm, pumping through consistent national tours while releasing 3 EPs, a full-length studio album, and most recently, winning the 2019 Bluesfest Busking Competition. Amongst the strong competition they faced, it’s no surprise they came out on top with their blend of Blues, Soul, Funk, and Hip-Hop that draws influence from other Bluesfest alumni such as Jurassic 5, Cat Empire, and Nile Rodgers & Chic, to name a few. Winning the Busking Comp granted them a Saturday slot at the Delta stage as well as a guaranteed set for 2020, an experience that has truly come full-circle for Jake as well as many of the Gold Coast locals that make up Electrik Lemonade. We caught up with Jake and the band this weekend ahead of their show at Brunswick Pub, the second to last gig of a sixteen date tour run.

How did the band originally come together back in 2010?

Well, funny story actually. I had lost one of my mobile phones for about a year and a half and one day found it under the driver’s seat of my car. I charged that thing up and had a message from one of my old mates who was living in Burleigh at the time. I headed over to his house and heard a beautiful piano riff coming from his roommate next door, so we started jamming and then everything sort of happened naturally from there. Friends of friends I met through parties and pub gigs ended up blossoming into what we are today.

And so, where does the name Electrik Lemonade come from?

We were sitting around a campfire years back, talking about all sorts of nonsense and someone brought up a black-market drink which was a chilled methylated spirit called Electrik Lemonade. We were like, damn that sounds pretty f’d up but actually really funky so we just ran with it as our band’s name. It’s been awesome as well seeing how some of the venues receive it, making Electrik Lemonade drink specials for our gigs. We’ll be playing and see all these fans partying with electric blue lemonade cocktails, which totally encapsulates our sound. Funky, fizzy, and buzzing with good times.

Spreading love and good times through your music seems to be the driving force behind your work. Tell us a little more about the vision you have with that message.

At the end of the day, our tunes are meant to inspire happiness. I think losing that spark of positivity, especially in a child, is detrimental for mental health and development, which is a prominent problem in the music industry today. Even if it’s not a child, mental health should still be a main concern, which makes the beauty of our music what it is. Whether you’re eight years old or eighty, we’ll make sure your feet are grooving to the music and that you walk away with a smile on your face. We’ll take any fan that’s keen to get down with us and leave the mental baggage at home. I’m getting goosebumps just talking about it.

How do you guys fit in to the current landscape of Blues and Funk music?

You know, it seems to be growing and we’re just trying to grow with it. There’s been a few bands on the Gold Coast that have come and gone trying to emulate our sound, adding a Hip Hop flavour to Funk and Blues. It works, it’s just a very niche market just because it’s all so subjective at the end of the day. If it wasn’t for Jazz, Blues and Funk music, there would be no Hip Hop so we just pay homage and respect to all of that and some of the greats like those we’ve seen at Bluesfest in the past.

You’ve had a strong run as a punter attending about 10 or so Bluesfests’ in the past but what was it like, winning the Busking Comp and getting to play the Delta Stage this year?

Oh man, I’m still on cloud nine from it. From being a kid at the festival before even picking up a guitar to throwing a party on stage for the fans this year has been my best experience as a musician to date. I mean when we rocked up and our green room was in between Iggy Pop and Hozier, I needed to pinch myself because it all seemed so surreal. Every aspect of it was so rewarding from loading up the van to charging the stage to play. A true honour and we’re excited to be back again next year.

With three EPs and a full-length album plus Bluesfest and a few national tours under your belt, what can we expect from Electrik Lemonade in the future?

Once we finish up this tour we’re on now, we’re going to put our heads down and start writing music right away. Summer party music is definitely on the docket along with another East Coast tour towards the end of the year. Looking into next year, we want to expand overseas to New Zealand, Japan, or the US. We’ve accomplished what we’ve wanted to accomplish over the last decade here on our home turf and we’re ready now to take it to that next step of international.
Check out the footage from Electrik Lemonade at Bluesfest here!