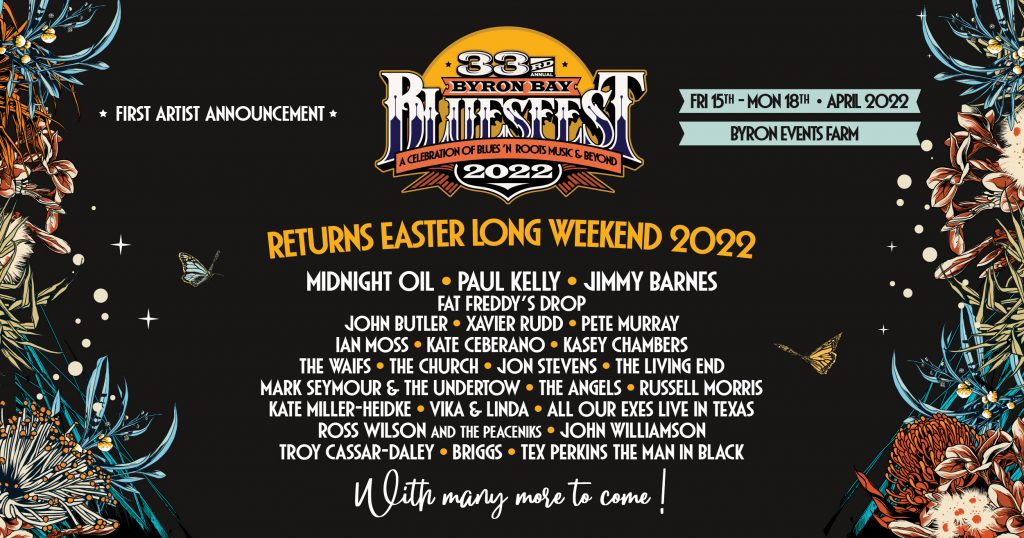 To our loyal Bluesfest patrons,

It is obvious that we cannot present Bluesfest in a safe manner in October – the safety and protection of our loyal Bluesfesters, our festival staff, our performers, our volunteers, stallholders and suppliers is paramount.

So, we have re-scheduled to our usual timing with dates over the Easter Long Weekend next year in April 2022 – by this time, we expect things to have returned much more back to normal.

We have worked so hard to bring back Bluesfest and we are not giving up. We are concentrating on the future – and it is bright!

The return of Bluesfest is over four jam-packed days next Easter from Friday 15th April – Monday 18th April 2022. PLUS… we are working on something special for Thursday 14th April 2022 for season ticket holders.

With the few artists that are unable to return, we have the pleasure to announce the new additions to our April 2022 lineup. These include (so far!): FAT FREDDY’S DROP, JOSH TESKEY & ASH GRUNWALD, JOHN WILLIAMSON, C.W. STONEKING… and the return of ROCKWIZ LIVE!

We have been working hard to fill the lineup. We cannot wait to announce the rest… YOU ARE GOING TO LOVE THE NEW NAMES – and we will let you know who they are soon.

In the meantime, we ask and urge every ticketholder to hold on to their tickets. They are automatically valid for the new Easter 2022 dates and you do not need to do anything to roll them over.

You will not be disappointed. As soon as this outbreak is over and we are out of lockdown safely, Bluesfest will be announcing the incredible new names joining our lineup next year.

Rest assured that you can still comfortably make an informed decision at this time, as we will continue to offer refunds until after the new artist announcement.

If you are unable to attend Bluesfest over the new dates, you will have the option to request a refund. Refunds for this event will be made available via Moshtix within the next few weeks. Ticketholders will receive a separate email from Moshtix with timeframes and instructions on obtaining refunds should they require.

We will return and when we do it will be the greatest Bluesfest atmosphere you have been part of, with easily the strongest bill of Aussie & Kiwi talent we have ever seen in this country.

Bluesfest 2022 over the Easter Long Weekend is only 35 weeks away… let’s go team! 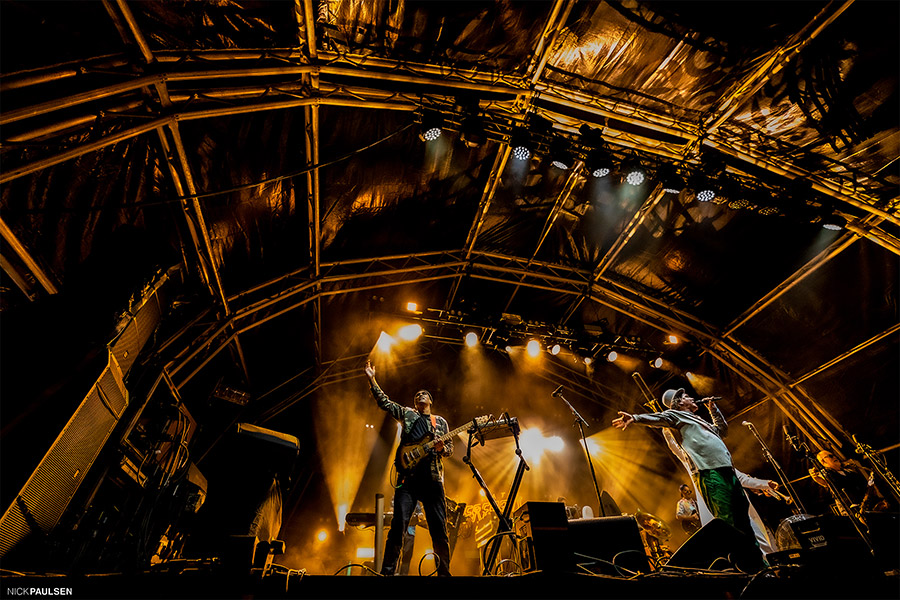 Fat Freddy’s Drop is internationally regarded as one of the world’s finest live draws. The seven piece band has navigated its way from the incubator of sunshine reggae through a colour-saturated field of soul psychedelia before swerving onto a desolate Detroit superhighway at night. It is a sound that demands to be heard live, a potent mixture of jazz virtuosity and diaphragm-wrecking digital sonics.

For Fat Freddy’s Drop it’s about the long game, a path that has come about by careful stylistic evolution, ever increasing production values and a heavyweight live reputation. They may have been around since the early Noughties, but they are truly the most modern of institutions. 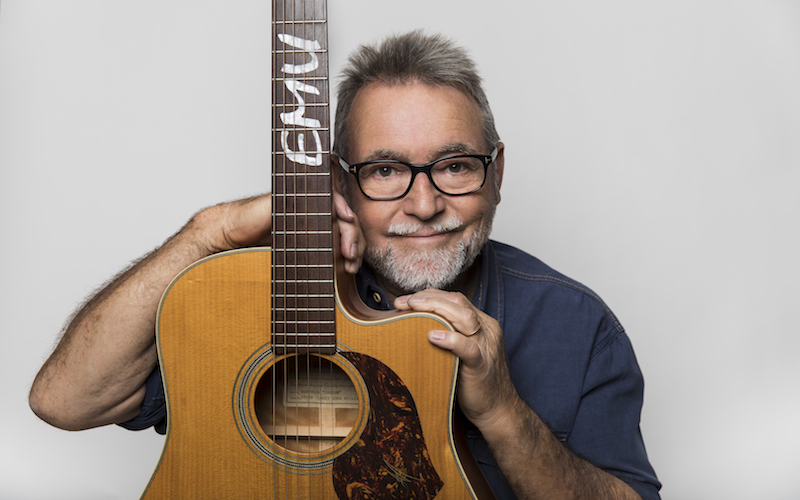 Australian icon, John Williamson, will celebrates his 51st anniversary in the music industry this year. Like a dust-covered road train traversing this country, his songs capture the beauty of the landscape and its people and, sometimes, the heartbreak of life Down Under, deftly moving between larrikin humour and touching pathos.  With his honours including the ARIA Hall of Fame, an Order of Australia, 28 Golden Guitar Awards, Australian Roll of Renown induction, not to mention over 5 million albums sold and thousands of shows performed, John Williamson will be scaling back his live performances at the end of his “Winding Back Tour”. Perhaps John’s greatest legacy is making Australians proud of their country and of who they are. So, don’t miss him, True Blue himself, at Bluesfest next Easter. 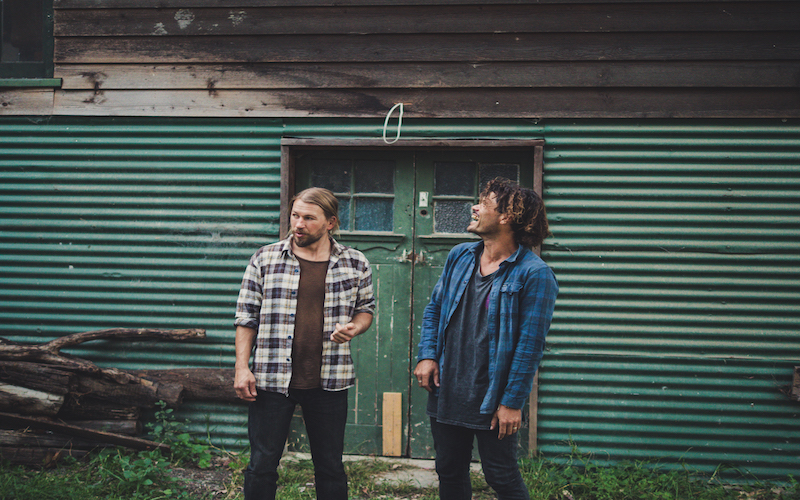 Two local powerhouses Josh Teskey (lead singer, The Teskey Brothers) and Ash Grunwald have teamed up and created an album born out of mutual love for the Blues and genuine appreciation for each other’s talents. Known as two of Australia’s most captivating vocalists, Josh Teskey & Ash Grunwald come together to cast of the weight of expectation and revel in music’s most simple pleasures.

Both artists have had an extremely busy 12 months. Renowned as one of Australia’s finest live performances, Ash Grunwald released his critically acclaimed new album ‘MOJO’ along with his first book, “Surf By Day, Jam By Night” whilst The Teskey Brothers followed up their ARIA Award-winning and Grammy nominated second album ‘Run Home Slow’ with the 2020 release of ‘Live At Forum’, earning them their first ARIA chart No.1! 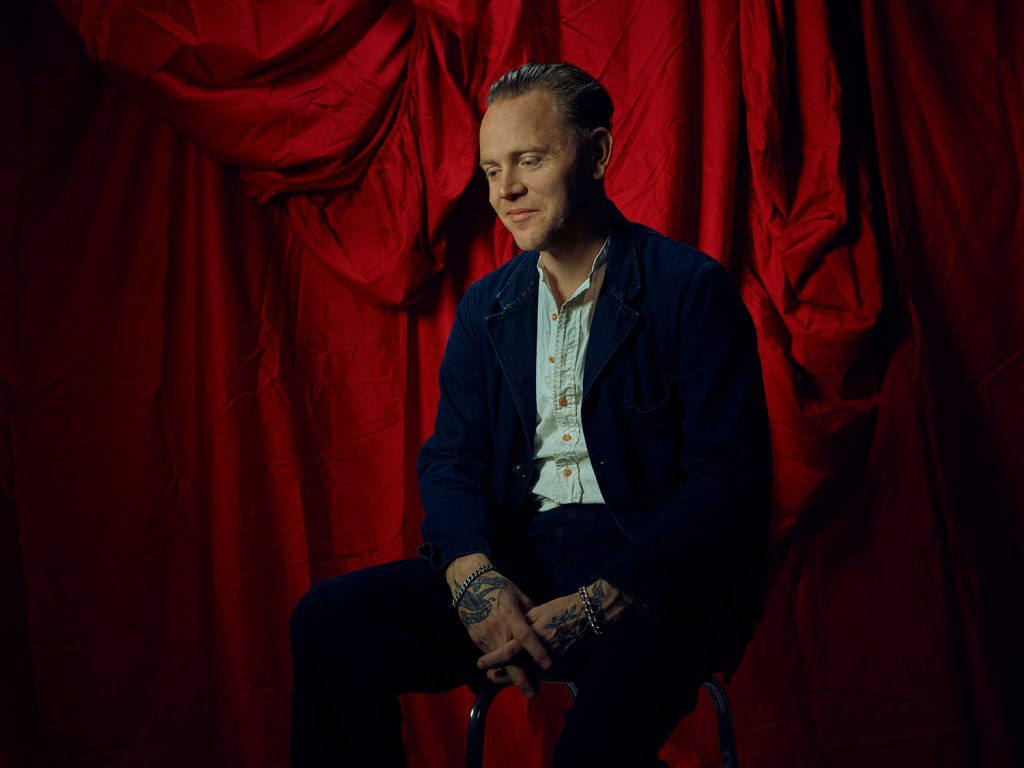 C.W. Stoneking is an artist for whom ‘unexpected’ is probably the default setting. How else to describe such a fine purveyor of American roots music who also happens to be a towering, youthful-faced white Australian man? He surprises first-time listeners, throws curveballs at long-time fans, and everything he does contains at least some background level of bafflement for all involved.

It’s probably easiest to describe him as a ‘blues artist,’ but the term disguises what makes his music special. There’s so much in there. A 1920s pre-war blues sound is key, but there’s almost equal helpings of New Orleans jazz, jug band music, hokum, country and calypso, and he’s lately brought in elements of jump jive, early rock’n’roll and gospel. His gift is that he brings them all together without anything sounding out of place. He finds the strands that connect all of these different styles and gently braids them together. C.W. has been nominated twice for the prestigious Australian Music Prize, scored a couple of ARIA and AIR awards, voiced a cartoon character and was most recently heard on Jack White’s album ‘Boarding House Reach’ – what’s next? Who really knows – All that can really be certain is that it won’t be what you’re expecting. 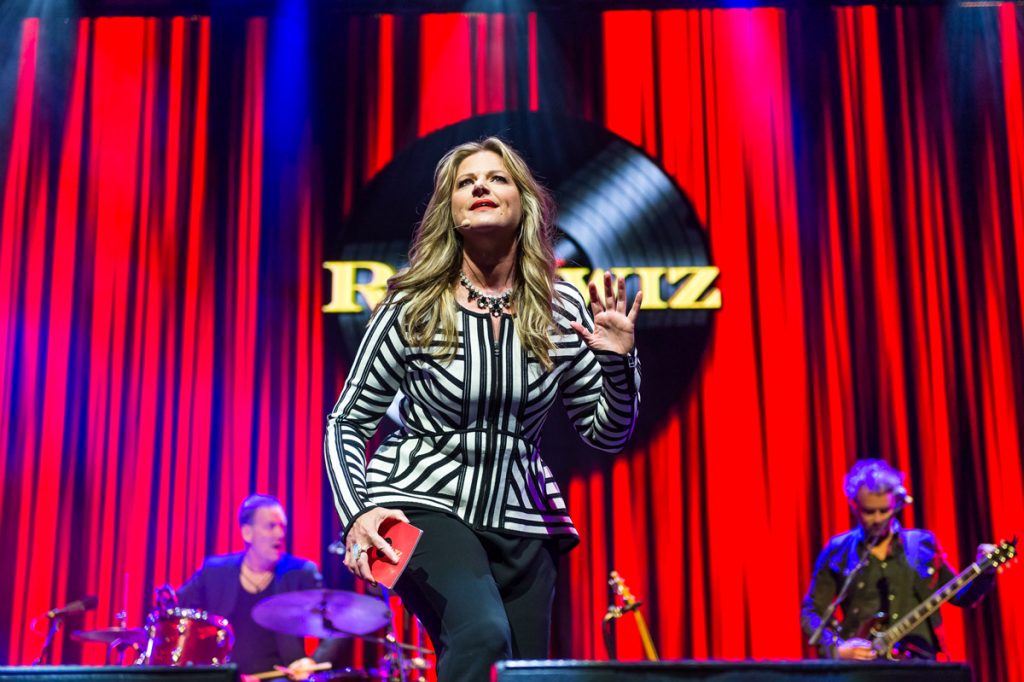 ROCKWIZ LIVE! The fabulous live show born of the cult TV hit show RocKwiz returns to the mighty Jambalaya stage. Julia, Brian, Dugald and the sublime RocKwiz Orkestra will bring all the madness and mayhem of the RocKwiz world to the Byron Bay Bluesfest in 2022. Featuring all the crowd favourites and a collection of very special guests. Get your Bluesfest day off to a great start with ROCKWIZ LIVE!