Bluesfest 2021 Easter Cancellation • How did it impact the economy? 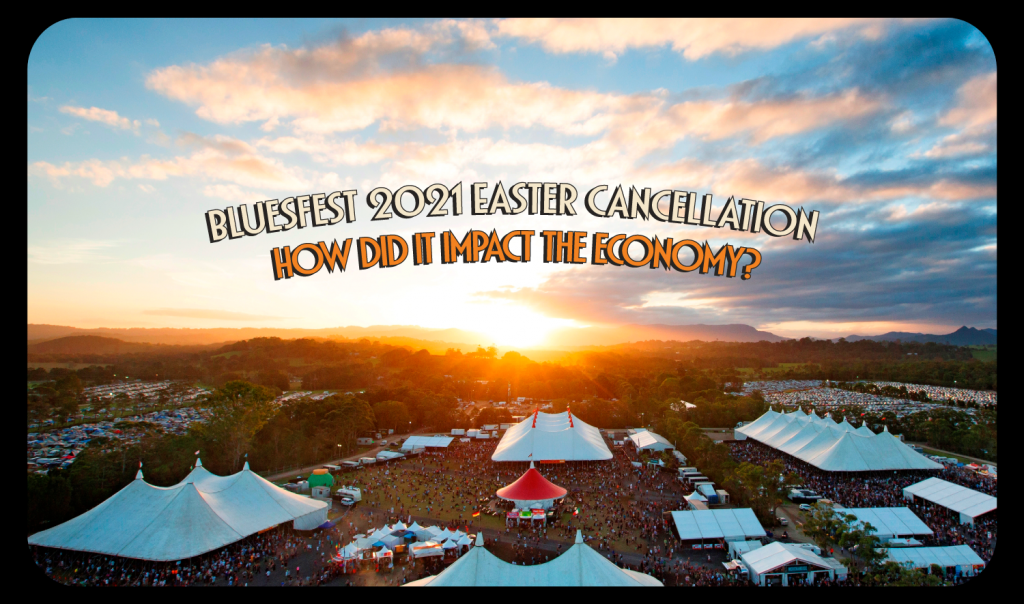 
“We were heartbroken when we first got cancelled in 2020, but the last-minute cancellation in 2021 was catastrophic”
Peter Noble OAM

Reuben Lawrence Consulting today delivered their Economic Impact Report regarding the cancellation of Bluesfest on 31st March 2021, just one day before it was due to go ahead at Easter.

“You may cancel us – but you cannot stop us from bringing millions of dollars into New South Wales and creating scores of jobs!”

Peter Noble OAM says that although he will never believe Bluesfest 2021 at Easter should have been cancelled, due to one positive case of COVID-19 from a non-festival ticket buyer who lives 35 mins drive time away from the event, you can’t change the past. The loss in 2021 due to the last-minute cancellation was estimated to be $181.2M including job losses of 897 [FTE] totalling $44.2M – yet we still created economic output of $33.8M and wages valued at $7.4M.

“We lost so much when Bluesfest was cancelled less than 24 hours out by NSW Public Health Order. Our entire industry was traumatized, yet we picked up the pieces, put ourselves back together, paid our bills, including significant payments to the cancelled artists and STILL DELIVERED MAJOR NUMBERS TO THE ECONOMY OF NEW SOUTH WALES IN ECONOMIC OUTPUT AND JOB CREATION.”

“In the end, we move on because we believe our industry, the live music industry, will come back stronger than ever. THERE IS SIMPLY NOTHING THAT EQUALS THE EXPERIENCE OF LIVE MUSIC. If you think we are going to give up, not only must you think again, but also we don’t think you are thinking right in the first place.  LIVE MUSIC WILL RETURN AND WE WILL BE AT THE FOREFRONT.”

Bluesfest is proud to be a pioneer in the music industry, finding a way to present live music in a safe manner during this pandemic.

After the first Bluesfest cancellation in 2020 by NSW Public Health Order, Bluesfest made the conscious decision to go ahead with Bluesfest 2021 in a COVID-19 safe manner within weeks. To that end, Bluesfest worked closely with NSW Health and relevant authorities from their appointed Events Task Force and achieved an approved COVID-19 Safety Plan (in-depth plan with 141 pages) and an exemption to go ahead under the acting NSW Public Health Order.

As per the COVID-19 Safety plan, the event was planned to be at reduced capacities, seated and presented over three stages to ensure patrons would be socially distanced and be able to enjoy the festival in a safe manner. The site, set up by hundreds of crew (many of whom were working for the first time since the start of the pandemic), was fully operational when Bluesfest 2021 was cancelled by NSW Public Health Order for the second year in a row; this time less than 24 hours before the music was due to commence. The devastating impact of this cancellation was felt immediately by so many patrons, artists, suppliers, crew, stallholders and resonated not just through the local community, but right across NSW and beyond. Many patrons had already travelled to the area from both intra- and interstate and over 500 campers were already checked in at Bluesfest campgrounds.

Although overarching figures are down from those incurred when Bluesfest was cancelled for the first time in March 2020, this is due mainly to the reduced capacity that was laid out in the approved Bluesfest COVID-19 Safety Plan.

Comparisons between the last full Bluesfest in 2019 and the 2021 Easter Bluesfest cancellation reveal a substantial number of jobs and economic benefits lost not only to the community but to the state and indeed the whole of Australia.

The output impact measures the increase in gross sales throughout the whole economy by summing all the induvial transactions resulting, directly and indirectly, from the economic stimulus.

The income impact measures the additional amount of wages and salaries paid to employees of the industry under consideration and to other industries benefiting from the stimulus to the economy.

The employment impact measures the number of jobs created by the stimulus, both directly and indirectly. FTE stands for Full-Time Equivalent.

Full-time equivalent is a unit that indicates the workload of an employed person in a way that makes workloads comparable across various contexts. An FTE of 1.0 is equivalent to a full-time worker, while an FTE of 0.5 signals half of a full workload.

The full Economic Impact Reports commissioned by Bluesfest and undertaken by Reuben Lawrence Consulting, an independent consultancy firm whose reports are accepted and referred to by official authorities, can be read here:

THE ECONOMIC IMPACT WITH 2019 BLUESFEST & WITHOUT 2021 BLUESFEST 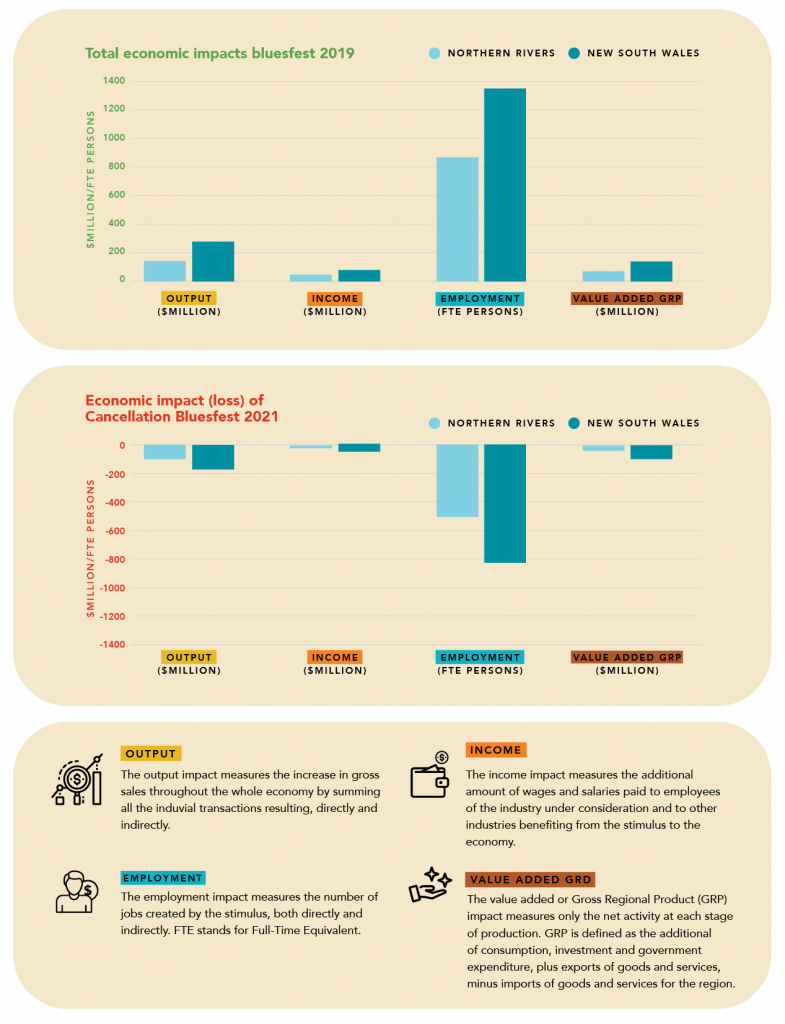 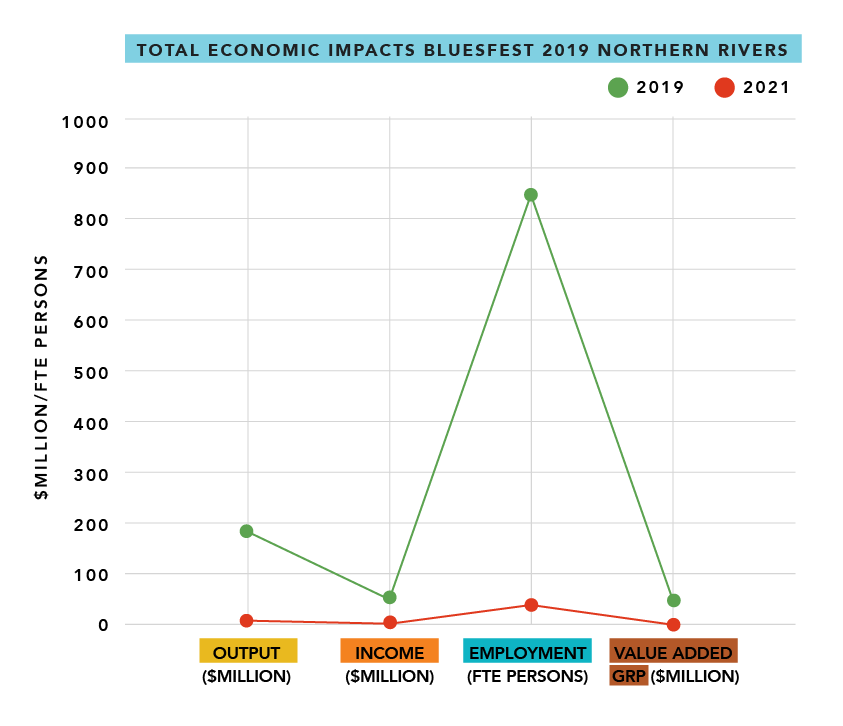