11 artists Added To The Bluesfest 2020 Lineup 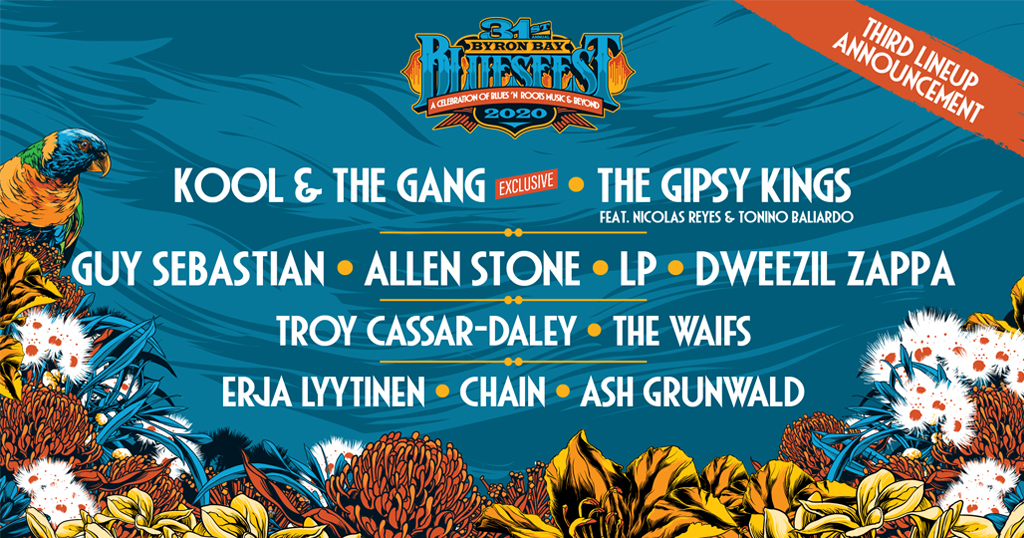 With Christmas around the corner, it’s a fine time to add more musical bows to the tree that is the Bluesfest 2020 lineup, which is already bustling with gifts for all this Easter! Joining the big names such as Crowded House, Dave Matthews Band, Patti Smith and her Band and Lenny Kravitz this Easter will be the iconic Kool & the Gang.

They will be guaranteed to get Bluesfesters hips shaking this Easter Saturday in what promises to be a star-studded night which also includes back to back performances by The Gipsy Kings, George Benson into Kool & the Gang, and with Patti Smith and Her Band along with Ani DiFranco headlining our other main stage, the hardest decision on the night will be who to watch!

Get ready to get your hips shaking to some funky classic 80s and 90s hits such as ‘Hollywood Swinging’, ‘Ladies Night’, ‘Get Down On It’, ‘Cherish’ with Kool & the Gang and their horn-driven jazz, soul, R&B, funk and disco this Easter! Since forming as a jazz ensemble in the mid-60s, Kool & the Gang have done it all. Get those dancing shoes on Bluesfesters, there’s a party goin’ on right here…!

The Gipsy Kings (the real ones!) featuring co-founders Nicolas Reyes (original lead singer-songwriter) and Tonino Baliardo (original lead guitarist and songwriter) who wrote, recorded and performed lead vocals and lead guitar on all their hits are coming Bluesfest! The band who captured the world’s imagination 30 years ago with their self-titled album became a genuine phenomenon around the globe. Expect Latin American beats combined with flamenco to continue those hip-shaking moves this Easter!

Singer, songwriter and producer Guy Sebastian is arguably Australia’s most successful male solo artist. Guy is the only Australian male artist to have ever achieved six number one singles and two number one albums in ARIA chart history. It is an instant classic that’s impossible to ignore.  We cannot wait to welcome him to the Bluesfest stage this April!

The evolution of an artist is a powerful process to observe. Allen Stone’s journey and evolution has been part pain and beauty. From the basements and small clubs of Seattle to sold out shows across the world, Allen has taken the long tireless road to building an audience and dedicated fanbase that is there for every word. Allen’s recent performance at Bluesfest earlier this year still has fans talking, so his return armed with a new album to share is highly anticipated.

The truly unique artist that is LP is making her Australian debut this April. We’re stoked to welcome her to the stages of Byron Bay. Check her out here –

Bluesfest 2020 truly is the year of the guitar! As a son of Frank Zappa, it was inevitable from the moment he was born that Dweezil Zappa was going to be a musician. He has long undertaken a mission to celebrate the sounds of his infamous father in a fresh context whilst keeping true to Zappa Senior’s unique and impeccable sonic heritage. Now, in celebration of 50 years since the album’s release (the year he was born), Dweezil is bringing his iconic ‘Hot Rats’ Live’ tour to Australia this April. Featuring his father’s 1969 album in its entirety as well as more of Frank Zappa’s choice cuts, the show will be a real treat for all Zappa fans.

Troy Cassar-Daley’s passion to pen stories about this land and what lies at the heart of it has been a driving force in his career which has encompassed 10 studio albums. Troy’s natural authenticity is in the bloodline of his music that endears him to his ever-growing number of fans from every walk of life.

Aussie trio, The Waifs will be hitting the road again to make their way to Byron Bay this Easter. The bands country roots have shone through over the years as they journeyed across the country in their well-travelled combi van winning them loyal fans along every step of the way over a quarter of a century later. Get ready for some more classic sing-along hits including ‘London Still’, ‘Lighthouse’ and many others.

Finnish vocalist, guitarist and songwriter Erja Lyytinen is going to be one of the discovery highlights at Bluesfest 2020. Just a couple of years ago, she took home the much-coveted European Guitarist of the Year Award.

The Godfathers of Australian Blues, Chain featuring Matt Taylor and one of Australia’s finest axeman Phil Manning, have reached another milestone as they enter their 52nd year since forming in 1968. As the only blues band to have a number one on Australian charts (Black ‘n’ Blue) as well as a number two (Judgement) they also have the distinction of having possibly the longest permanently released album in Australian rock history. It doesn’t get any more quintessentially Oz Blues than this!

Acclaimed as one of Australia’s finest storytellers and live performers Ash Grunwald is set to ignite the Bluesfest stages with his unique storytelling capabilities and an avalanche of rhythmic fury on guitar. Backed by his impeccable band, Ash Grunwald’s signature soul–drenched vocals have the power to move mountains and create positive change.

Add those to the already star-studded lineup of Bluesfest 2020 and we sure are in for a ‘Jungle Boogie’ this Easter long weekend! For the full lineup so far see bluesfest.com.au/lineup.